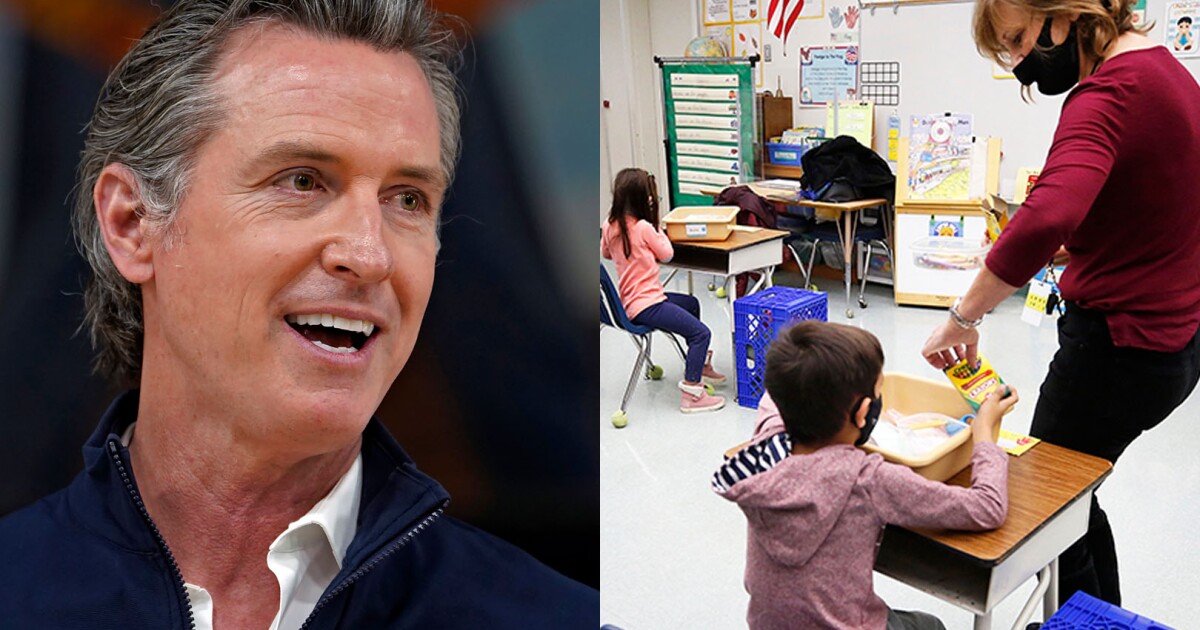 Gov. Gavin Newsom and Democratic legislative leaders announced an agreement Monday to give school districts $2 billion to open schools for students in transitional kindergarten through second grade by April 1, focusing on California’s youngest children after almost a year of distance learning.

The negotiations wrapped up over the weekend, according to sources close to both the governor and the Legislature who confirmed its basic components.

The plan, detailed in Assembly Bill 86, provides financial incentives to school districts that offer in-person instruction in counties with fewer than 25 new daily confirmed coronavirus cases per 100,000 residents, a threshold almost all California counties currently meet as the winter’s rapid spread of the virus had slowed.

School districts seeking funds from counties in the state’s red tier, with seven or fewer cases per 100,000 residents, would be required to extend classroom learning to all elementary school students and at least one grade of middle or high school.

But the proposal, expected to receive passage in the Legislature on Thursday, stops short of mandating that schools across the state must reopen. Instead, it leaves the final decision up to local education officials and, in some areas, subject to agreements between districts and the unions representing school employees.

“I look forward after that vote on Thursday to quickly signing this and moving forward to celebrate the reopening for in-person instruction of schools all up and down the state of California,” Newsom said during an event at a school in Elk Grove, a suburban Sacramento community where schools were some of the first to close last year.

The deal marks the completion of weeks of negotiations at the state Capitol and merges current public health guidelines with earlier school reopening proposals introduced by the governor and lawmakers. For Newsom, the proposal envisions students back on campus a full two months later than he had promised in the plan he offered in late December. Lawmakers objected to his original effort’s requirement for schools to submit lengthy applications for the money and balked at some of the early details over community public health standards.

But the fiercest debate over reopening more school classrooms centered on whether to promise COVID-19 vaccinations to educators. Newsom, who initially balked at new guarantees, relented last month and set aside 10% of the state’s weekly vaccine doses for
childcare and K-12 staff beginning this week.

Public health officials said Monday that the state is on course to surpass Newsom’s initial estimate of providing at least 75,000 weekly vaccine doses. And Los Angeles Unified School district officials have announced they expect enough vaccinations to reopen campuses by April 9 — a week later than the new statewide plan for opening classrooms.

The legislation says vaccinating teachers and staff is not a precondition for a district to return to in-person learning, a mandate demanded by the California Teachers Assn.

Union leaders also failed to block Newsom’s push to broadly reopen schools in the state’s most restrictive purple tier of cases in counties. State officials are expected to update the tiers Tuesday. As of last week, all but two California counties had case rates that would allow TK-second grade students to return to their classrooms.

State legislators pushed for the bill to reinforce the state Department of Public Health’s guidance on testing. The legislation says districts that reopen schools in counties that are in the state’s purple tier will be required to conduct testing of students and staff even without any reported cases on campus. But it allows districts to avoid that requirement if by March 31 they adopt a plan to return to the classroom, or already offer elementary instruction in-person. Schools that open in the red, orange and purple tiers are not required to test asymptomatic pupils or staff.

The plan relies on financial incentives to get more campuses to open in the spring. School districts in counties that meet the virus case threshold and do not open by April 1 would lose 1% of their share of the $2 billion in reopening funds for each school day that distance learning is the only option that’s offered. Schools that are currently open or have plans to reopen before the end of March would be allowed to go forward with their respective reopening and still qualify for the funding.

The $2-billion price tag for getting more California school campuses open was set in Newsom’s original December proposal. In addition, the governor has urged lawmakers to take early state budget action to set aside an additional $4.6 billion for students to receive extra help into the summer to mitigate the shortcomings of distance learning.

The final legislation deviates from earlier proposals that made a district’s school safety plan subject to union approval, a provision that some worried could require local parties that had already reached agreements to return to the negotiating table, slowing down a return to the classroom. By omitting any mention of agreements with unions, the state leaves bargaining subject solely to existing state law and local decision-making.