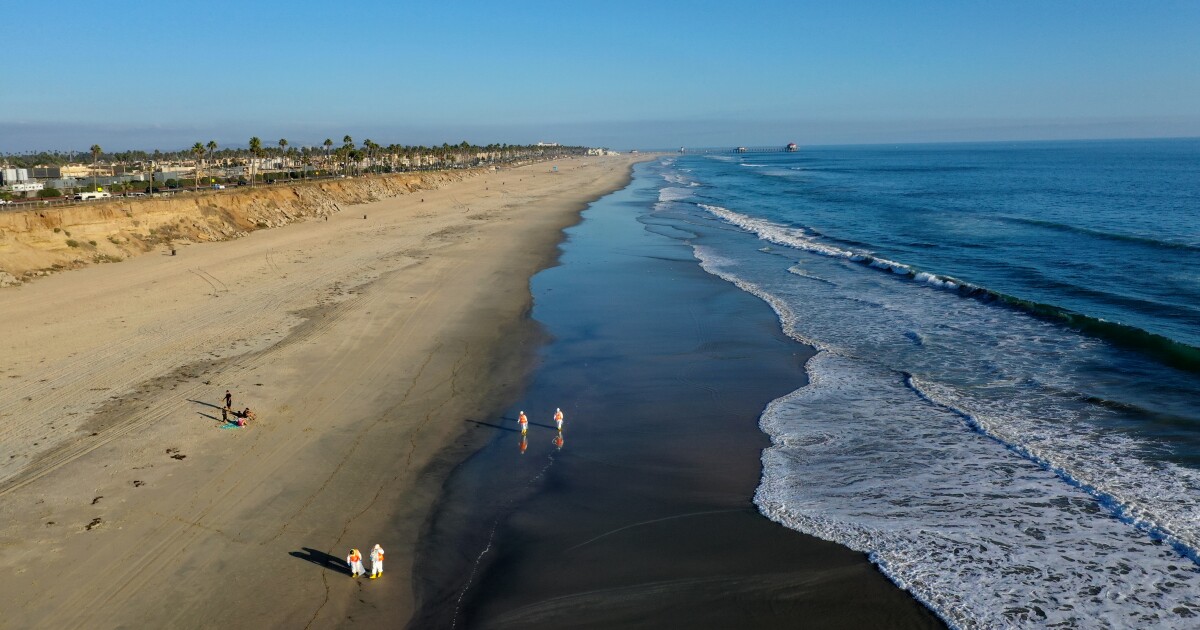 State and federal authorities are investigating an oil sheen spotted in the ocean near the ruptured pipeline that caused last month’s oil spill off Orange County, officials said.

“It is a light sheen, not a slick,” said U.S. Coast Guard Petty Officer Richard Braham. “The Coast Guard and [California Department of Fish and Wildlife] launched a team. They are currently investigating it.”

He said the sheen was reported to cover an area of 70 feet by 30 feet and likened it to the multicolored swirls that appear in the water when diesel gas is spilled at a boat dock. Divers working for Amplified Energy, the company that operates the oil platforms and pipeline that caused the spill, reported the sheen.

Braham said the state and federal responders, using boats and a helicopter, have been unable to find the sheen, and its cause was not determined.

“That’s not really unexpected; if you know these things, they break up pretty fast,” he said.

State Sen. Dave Min (D-Irvine) said he was in touch with officials of the Department of Fish and Wildlife, who were continuing the search.

“Maybe it’s just some residue coming off one of the pipe repairs,” he said in an interview.

“But whether or not this is another oil spill,” he added, a future one is an “inevitability until we get rid of these oil platforms off our coast.”

The Oct. 2 spill released between 24,696 and 131,000 gallons of oil into the San Pedro Channel. Authorities believe the leak was caused by a ship’s anchor rupturing a pipeline that runs from an oil processing platform off Huntington Beach to the Port of Long Beach.

The October spill closed beaches from Huntington to San Clemente and sparked fears of an environmental catastrophe that would kill wildlife and befoul beaches for years. But the oil was mostly contained off the coast and did not cause significant destruction of tidal habitat.

However, the pipe rupture renewed calls to end drilling before a more devastating accident does occur.

Min pointed out that the aging infrastructure is no longer operated by corporations like the Shell Oil Co. — which built the unit off Huntington — but by smaller, “thinly capitalized” energy companies like Amplified that can’t afford the proper upkeep.

Maritime officials say the platforms off Orange County have always been hazardous because of heavy shipping out of the ports of Long Beach and Los Angeles.

During the pandemic, a supply chain bottleneck has left dozens of cargo ships anchored in oil-drilling areas off the coast. Federal authorities believe one of their anchors dragged the Amplified pipeline, leading to the rupture. On Thursday, agents boarded the container vessel Beijing in Long Beach, identifying it as a second ship under investigation in the spill.

A Coast Guard investigator determined that the Beijing was involved in an anchor-dragging incident Jan. 25 during heavy weather at the ports of Los Angeles and Long Beach, officials said in a statement, and the Coast Guard has designated the ship’s owner, Capetanissa Maritime Corp. of Liberia, and operator, V.Ships Greece Ltd., as parties of interest.

Another cargo vessel, MSC Danit, had previously been identified as under investigation for anchor-dragging.

Coast Guard Capt. Jason Neubauer, who is leading the investigation, told The Times “both vessels could be involved” in dragging the pipeline off Huntington Beach with their anchors earlier this year.