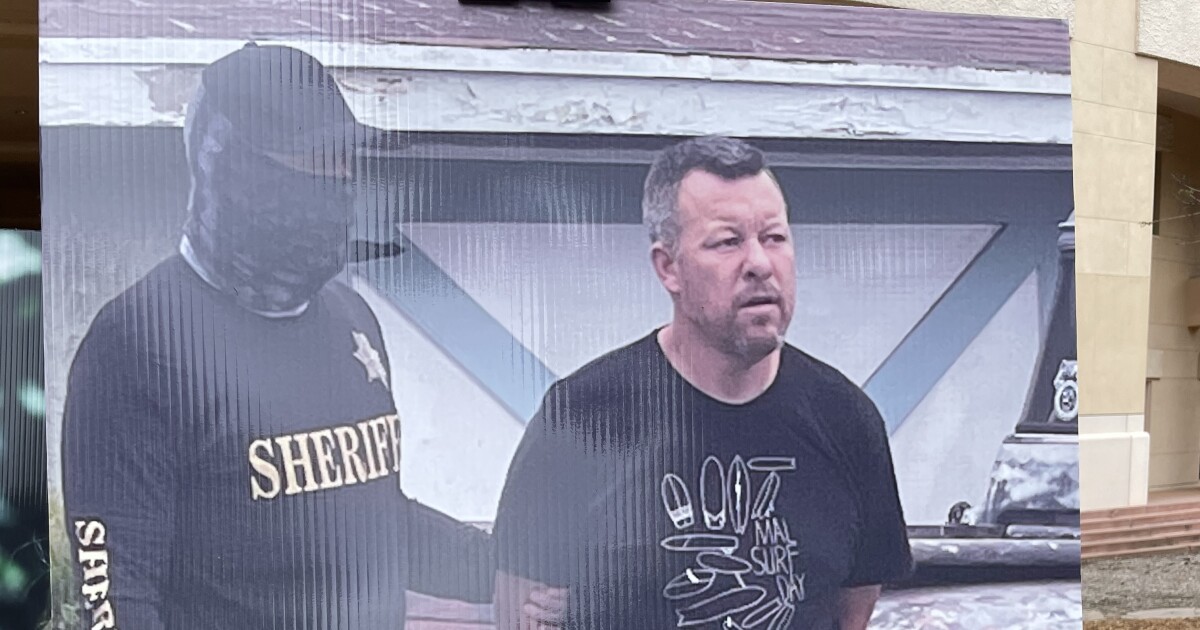 Cal Poly was the last place the 19-year-old freshman was seen alive nearly 25 years ago.

Sheriff Parkinson laid out the recent timeline leading to Flores’s arrest. He explained that in late 2016, investigators got ahold of evidence that identified Flores as the prime suspect in Kristin’s disappearance.

Then in 2019, they interviewed at least one new witness that had not been previously interviewed. Parkinson attributed the “Your Own Backyard” podcast for bringing that new information to light.

With that new evidence, Parkinson said detectives were able to secure a court order to intercept Flores’s electronic communications.

After that, search warrants served at Flores’s home in San Pedro, his parents’ homes in Arroyo Grande, and his sister’s home reportedly yielded evidence for a second search in San Pedro where Sheriff Parkinson says investigators collected evidence related to the murder of Kristin Smart.

A second search at Paul’s father’s home just last month also reportedly yielded evidence that resulted in a judge issuing two more search warrants and two arrest warrants – one for Paul and one for his father, Ruben.

Ruben Flores was arrested Tuesday morning on suspicion of being an accessory to the crime. A search at his home on White Court in Arroyo Grande continued Tuesday afternoon and Parkinson said it could continue into the next day. Investigators also searched Paul’s house again.

Sheriff Parkinson said the search warrants are sealed so he can not discuss what evidence was found; however, he said investigators have not yet recovered Kristin’s remains.

Parkinson said he spoke to the Smart family on Tuesday, saying, “I think they’re feeling a bit of relief, but as you can imagine, until we return Kristin to them, this is not over.”

He said he believes they are closer to finding Kristin and investigators will continue to focus on locating her remains.

The case has been turned over to the San Luis Obispo County District Attorney’s Office.

Paul Flores is expected in court for arraignment on Thursday. He is being held without bail.

UPDATE (12:28 p.m.) – Paul Flores was booked into the San Luis Obispo County Jail just after noon Tuesday on a single charge of murder.

Booking logs did not show a bail amount.
___

UPDATE (10:10 a.m.) – Ruben Flores was booked into the San Luis Obispo County Jail shortly after 9:30 a.m. on a single charge of being an accessory after the fact, California Penal Code 32PC.

Paul’s father, Ruben Flores, was also reportedly taken into custody at around the same time at his home in Arroyo Grande. San Luis Obispo County Sheriff’s officials are serving another search warrant at the Arroyo Grande property this morning.

KSBY News reached out to Paul Flores’s attorney, Robert Sanger. He told us he does not comment on pending cases.
___

KSBY News will broadcast the sheriff’s press conference live over the air and on ksby.com/live starting at 2 p.m.

Smart was a freshman at Cal Poly when she disappeared back in 1996.

According to witnesses, she was last seen with fellow student, Paul Flores, after leaving an off-campus fraternity party in San Luis Obispo and walking back to her dorm.

Early on in the investigation, Flores was identified as a person of interest in Smart’s disappearance. For the first time just last month, sheriff’s officials referred to him as the “prime suspect” in the case.

That revelation came as sheriff’s investigators served a search warrant at the Arroyo Grande home of Flores’s father, Ruben Flores. At around 7:45 a.m. on Tuesday, multiple unmarked law enforcement vehicles were again spotted outside Ruben’s home. Officials at the scene told KSBY News they are serving another search warrant.

Detectives spent two days, March 15-16, searching the property on White Court using cadaver dogs and ground-penetrating radar and digging in several spots outside the house. They also hauled away an old Volkswagen.

It was the third search targeting Paul Flores and his family in just over a year. In February 2020, his parents’ and sister’s homes were searched on the same day detectives searched Paul’s home in San Pedro. Digital devices were reportedly seized. In April 2020, the San Pedro property was searched a second time.

In February of this year, Paul was arrested on a weapons charge that sheriff’s officials said was the result of information obtained during the 2020 searches. However, investigators have not yet revealed whether any evidence related to the Kristin Smart case was found.

While her body has never been found, she was declared legally dead on May 25, 2002.