Newly released video of Rep. Marjorie Taylor Greene has increased scrutiny of the GOP congresswoman. Two Democrats have called for her to be expelled from Congress while Speaker Nancy Pelosi criticized the House GOP leadership for its support of Greene. Brynn Anderson/AP hide caption 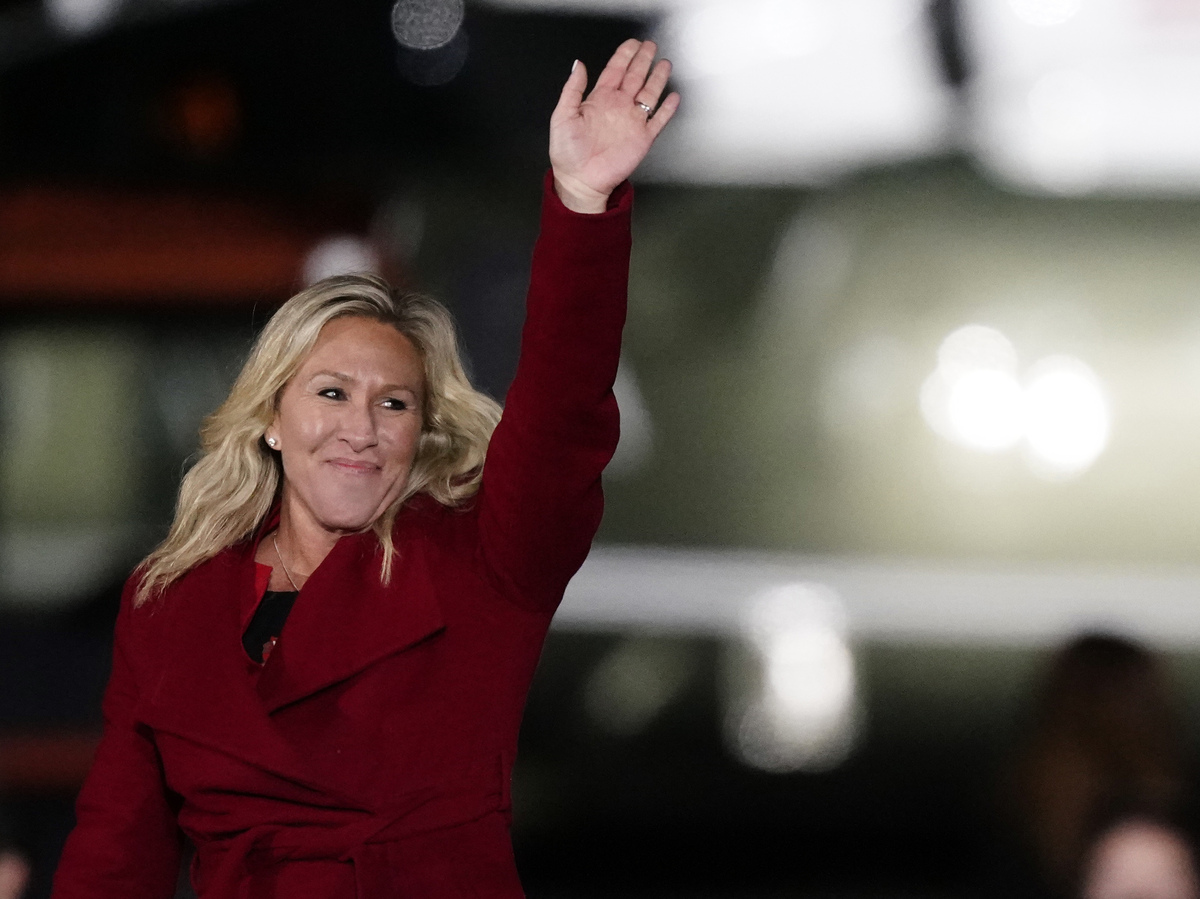 Newly released video of Rep. Marjorie Taylor Greene has increased scrutiny of the GOP congresswoman. Two Democrats have called for her to be expelled from Congress while Speaker Nancy Pelosi criticized the House GOP leadership for its support of Greene.

House Speaker Nancy Pelosi took aim Thursday at the Republican leadership, saying the GOP had ignored a wave of threats and comments by Rep. Marjorie Taylor Greene, R-Ga., a promoter of QAnon and other conspiracy theories, and placed her on the House Education Committee.

“What could they be thinking?” Pelosi told reporters. “Or is thinking too generous a word for what they may be doing?”

Greene’s views, which came under scrutiny during last fall’s Republican primary for Georgia’s 14th Congressional District, garnered fresh attention this week when CNN reported on a video showing her in 2019 accosting a survivor of the shooting at Marjory Stoneman Douglas High School in Parkland, Fla. Greene has said that shooting, which left 17 dead, as well as the 2012 massacre at Sandy Hook Elementary School, which left 26 dead, including 20 children, were both staged events.

Pelosi cited Greene’s remarks in her criticism of the GOP leadership, calling it “absolutely appalling.”

“What I am concerned about is the Republican leadership in the House of Representatives who is willing to overlook, ignore those statements, assigning her to the Education Committee when she has mocked the killing of little children at Sandy Hook Elementary School, when she has mocked of killing of teenagers in high school at the Marjory Stoneman Douglas High School,” she said at a briefing on Capitol Hill.

A spokeswoman for House Minority Leader Kevin McCarthy on Thursday reiterated the California Republican’s own concerns about Greene’s comments.

“These comments are deeply disturbing and Leader McCarthy plans to have a conversation with the congresswoman about them,” the spokeswoman said.

An aide for Rep. Steve Scalise, the minority whip, referred to comments Wednesday in which the Louisiana Republican said Greene’s comments were no exception to his consistent calls to condemn the use of violent rhetoric in politics.

Other House Republican leadership offices did not immediately respond to a request for comment.

Some House Democrats have called for Greene to face repercussions amid the new reports over Greene’s comments, including purported threats on Facebook against Pelosi in which she suggested the speaker be “executed for treason.”

“If you don’t understand that calling for the murder of political rivals is a threat to democracy, you shouldn’t be allowed to represent one,” Auchincloss said in a tweet.

Pelosi didn’t directly address the threats, but she did tell reporters that several steps are underway — supplemental funding to raise security measures for lawmakers — to address new security concerns among members, especially “when the enemy is within the House of Representatives.”

Pelosi also noted she would be meeting with retired Lt. Gen. Russel Honoré, who is leading an investigation into security at the Capitol complex following the insurrection. Honoré is expected to issue an interim report shortly, and members were to expect an additional update from the acting House Sergeant at Arms.

Hours after Pelosi’s comments, acting U.S. Capitol Police Chief Yogananda Pittman said in the wake of the agency’s security failures, they will ask for new measures, including a permanent fencing system and the availability of “ready, back-up forces in close proximity to the Capitol.”
Source Link