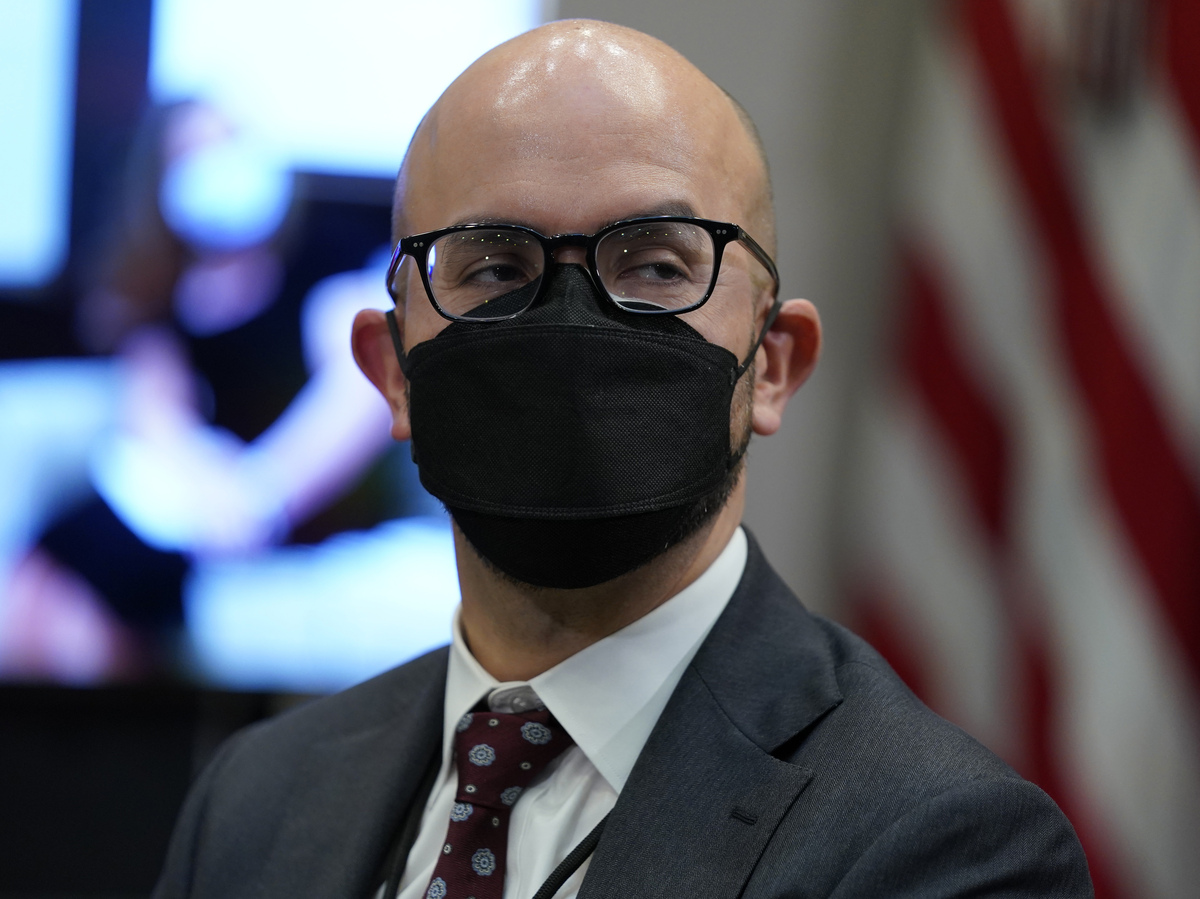 National Security Council senior director for the Western Hemisphere Juan Gonzalez, shown here during a meeting at the White House last month, recently returned from a trip to Mexico and Guatemala.

Many migrants who come to the U.S. border from Central America are doing so because of “a predatory elite” who are tied to a host of problems in their home countries — not because of President Biden’s easing of Trump-era immigration policies, according to Juan Gonzalez, a top aide to Biden on immigration.

“You have, frankly, a predatory elite that benefits from the status quo, which is to not pay any taxes or invest in social programs,” said Gonzalez, the National Security Council’s senior director for the Western Hemisphere and a special assistant to President Biden.

“Migration is essentially a social release valve for migrants,” he said, adding that remittances from their earnings in the U.S. drive more consumption in their home countries.

When parents and young people look around in countries that lack paved roads and good jobs — and can also carry the threat of gang violence and violence against women — they see no alternative but to risk their lives by heading north, Gonzalez said.

Gonzalez spoke to NPR’s Steve Inskeep after returning this week from a trip to Guatemala and Mexico, where he and Roberta Jacobson, a former ambassador to Mexico who is now on the National Security Council, met with officials to discuss ways to defuse the crisis at the U.S. southern border.

Fixing those problems will be neither simple nor quick, Gonzalez said.

“It’s a generations-long effort,” he said, adding that while some short-term solutions could arise, migration requires a sustained approach that has bipartisan and international support.

Their visit came as the Biden administration grapples with a crisis at the southern U.S. border, where the pace of migrant arrivals has risen since the end of the Trump era.

“I’m not going to do it,” the president said.

Many have connected the rise in migration to Biden’s policies — and while Gonzalez acknowledges that a real shift in priorities and approach is taking place, he noted that other factors are in play. He also depicted former President Trump’s approach as an outlier.

“You had a previous administration that had a Fortress America approach, ignored our international humanitarian obligations, and thought a wall was a solution,” Gonzalez said, “even though, migrants and drugs actually enter our country through points of entry.”

Biden’s goal, Gonzalez said, is to enforce U.S. law but also to acknowledge that the U.S. is a nation of immigrants.

“We can both manage migration responsibly and with dignity, enforce our borders and address migration at the source — that’s the proposal that he’s putting forward,” he said.

White House officials have said that the solution to massive migration numbers must include holistic elements, stressing the importance of improving life and bolstering opportunities in migrants’ home countries.

The Obama administration committed billions of dollars to countries where migrants originated, in hopes that the money would improve conditions there enough to reduce the flow of people moving north. Asked if the Biden administration will revive that program, Gonzalez gave a straightforward answer.

Gonzalez said that the Center for Global Development conducted a study that showed the U.S. investments led to less violence in El Salvador, which in turn resulted in drops in migration.

“So we were seeing results, and then the Trump administration came in and cut a lot of those programs,” he said.

But he added that no amount of money would make an impact without political will in those countries, and commitments from their private sectors and civil society.

Biden has tasked Vice President Harris with the job of working with governments in Mexico and Central America to ease the flow of migrants.

With Harris in charge of the effort, Gonzalez said, the U.S. will take a “much more partnership-based approach” to work other countries and with foundations that operate in the region.

“There are carrots and sticks,” Gonzalez said, to help the U.S. navigate the conundrum of finding ways to help people in countries where those in power may not share the same goal.

Money, of course, is often seen as the best carrot. Gonzalez noted that the U.S. could gain leverage through international investment from U.S. corporations — if the environment is favorable in Mexico and Central America.

As for the stick, he said Harris will work to create a regional anti-corruption taskforce – a move that would fulfill a Biden campaign promise. And he said the U.S. and its partners could impose sanctions and “freeze assets of individuals involved in money laundering.”

As part of the trip, Gonzalez, who is originally from Colombia, visited officials in Guatemala to discuss how to cope with the root causes underlying migration. He has particular experience in that country, having served as a Peace Corps volunteer in Huehuetenango.

Gonzalez also has a long working history with Biden. He served as the then-vice president’s special advisor from 2013-2015, when he advised and represented Biden on matters related to the Western Hemisphere.
Source Link