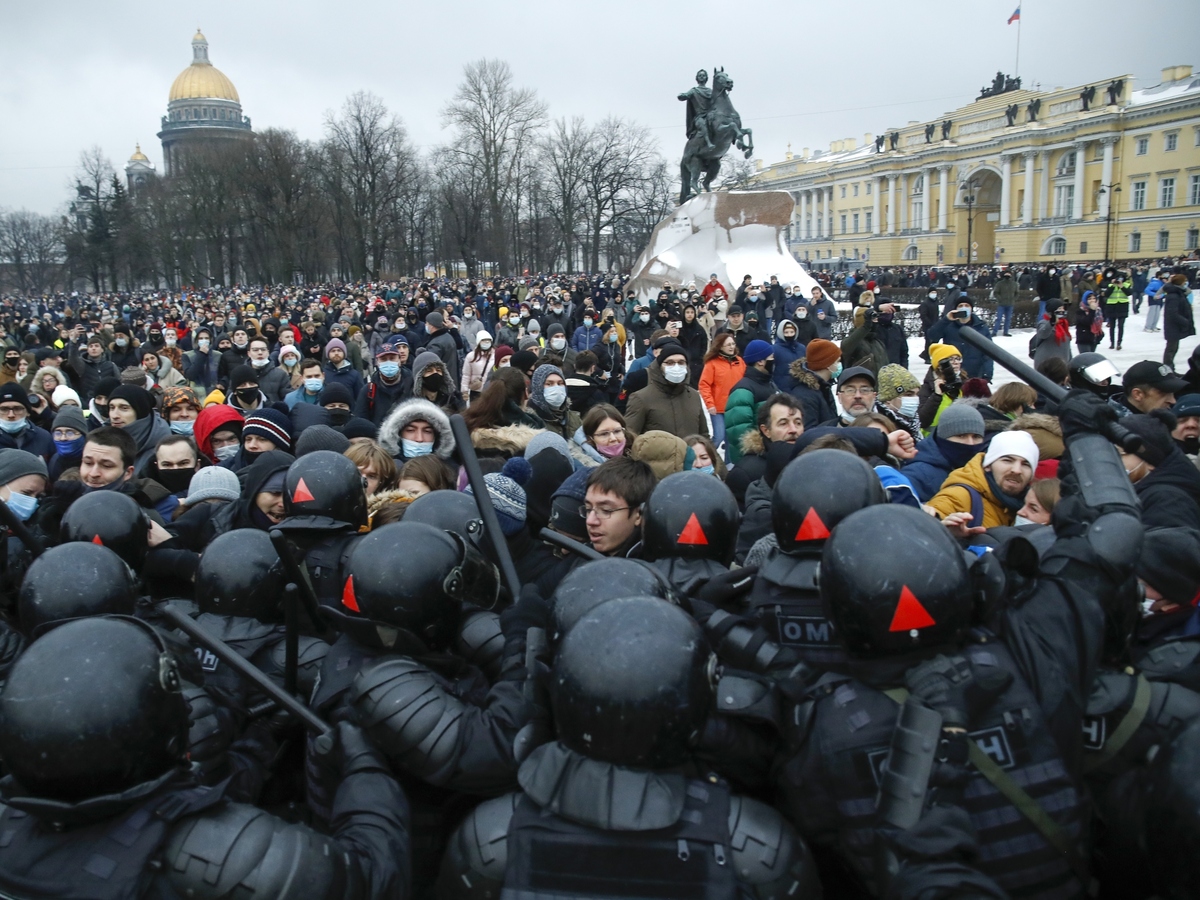 People clash with police Saturday during a protest in St. Petersburg, Russia, against the jailing of opposition leader Alexei Navalny.

Tens of thousands of Russians took to the streets in protest on Saturday to demand the release of jailed opposition leader Alexei Navalny, braving the threat of mass arrests in what was expected to be one of the largest demonstrations against the Kremlin in years.

From the port city of Vladivostok in the east to the capital of Moscow seven time zones away in the west, protesters swept across the country in open defiance of warnings from Russian authorities that the demonstrations have been deemed illegal.

In Moscow, protesters gathered in Pushkin Square for what appeared to be the largest of the day’s protests. They were met by police trucks and city buses filled with riot officers, who blared messages from a public-address system telling demonstrators not to gather closely due to the risks of the coronavirus and warning them that the protest was unlawful. In all, Navalny supporters said that protests were planned across 90 cities, including the Siberian city of Yakutsk, where temperatures plunged to minus 60 Fahrenheit.

Police and protesters clashed in multiple cities and by 5 p.m. Moscow time more than 1,300 demonstrators across the country had been detained, according to OVD-Info, an activist group that monitors arrests at protests. Among those detained was Navalny’s wife, Yulia Navalnaya, who shared a photo of herself from inside what she said was a paddy wagon.

“They can’t put everybody in jail. There are many people and I don’t think that we have enough jails to put everyone in there,” said Maria Nechayeva, 27, an attorney at an IT company who was attending the protest in Moscow.

Mass demonstrations had been widely expected in the aftermath of Navalny’s arrest on Jan. 17 upon his return to Russia from Germany, where he spent the last five months recovering from a near-fatal poisoning. German doctors said that Navalny was poisoned with a variant of the Soviet-era nerve agent known as Novichok. Navalny has blamed the Kremlin for the poisoning — a charge Russian President Vladimir Putin has denied.

“We haven’t seen protest activity like that for many years,” said Angela Stent, a professor at Georgetown University and author of the book Putin’s World: Russia Against the West and with the Rest. “I think what this shows is that for whatever reason, the Kremlin is now making Navalny a much more popular figure than he was before.”

Russian authorities said Navalny was arrested for allegedly violating the terms of a suspended sentence dating to a 2014 embezzlement conviction. A Moscow court is due to rule next month on whether his 3 1/2-year sentence in the case will be converted into a prison sentence. Navalny has called the case, like others against him, politically motivated. Amnesty International has designated him a “prisoner of conscience.”

Yet even from jail, the 44-year-old opposition figure has continued to be a thorn in Putin’s side. After a judge ruled to remand him in custody for 30 days on Monday, Navalny posted a video on social media appealing to supporters to protest. “Don’t be afraid,” he said. “Take to the streets. Don’t do it for me, do it for yourselves and your future.”

On Tuesday, Navalny’s team released a scathing investigation accusing Putin of corruption and detailing the construction of a lavish palace on the Black Sea allegedly build for the Russian leader using a “slush fund.” The investigation, titled “Putin’s palace. History of world’s largest bribe,” has already been viewed more than 70 million times since its release on YouTube. The Kremlin has denied Putin has such a palace, calling the investigation “pure nonsense.”

In the lead-up to Saturday’s protests, Russian authorities from the Kremlin on down warned of potential crackdowns on demonstrators, with the Interior Ministry saying unauthorized demonstrations would be “immediately suppressed,” and Dmitry Peskov, a Kremlin spokesman, saying there would be “possible consequences related to noncompliance with the law. Prosecutors and police called the planned rallies illegal, and colleges threatened to expel students who attended them.

Amid the warnings, authorities moved to detain several key members of the opposition leader’s circle and charged them with breaking protest regulations. On Thursday, police in Moscow arrested Navalny’s press secretary, Kira Yarmysh, as well as Georgy Alburov, who helped produce the Putin investigation released earlier this week. Also arrested was Lyubov Sobol, an attorney for Navalny’s Anti-Corruption Foundation. Yarmysh was ordered to spend nine days in jail, while Alburov was given a 10-day sentence. Sobol was released but ordered to pay a fine equivalent to roughly $3,300.

Efforts to stem the protests extended online, where videos in support of this weekend’s demonstrations have garnered hundreds of millions of views since Navalny’s arrest. The Russian media regulator Roskomnadzor — which has threatened to fine social media companies over protest-related content — said on Friday that TikTok had taken down 38% of posts calling on minors to participate in the demonstrations. Some 50% of flagged content was taken down from YouTube, while 17% was pulled from Instagram, according to Roskomnadzor. The agency said the posts amounted to calls to “participate in illegal actions.”

Undeterred by the official warnings and arrests, young Russians continued to film themselves preparing for the protests. In some, they voice support for Navalny. In others, they mock Putin.

It’s a reflection, said Stent, of the frustrations among an entire generation of Russians who have only known one leader in their lifetimes.

“If you look at some of the interviews,” she said, “with some of the young people out on the streets, they say, you know, ‘I’m 20 whatever years old, I’ve only known one leader, Putin, who’s been in power now for 21 years. You know, we want something different.’ ”

In a message of his own relayed by an attorney and posted to Instagram on Friday, Navalny took notice, thanking his followers for their support.

Said Navalny, “Respect to the schoolchildren who, according to my lawyer, ‘wreaked havoc on TikTok.’ ”