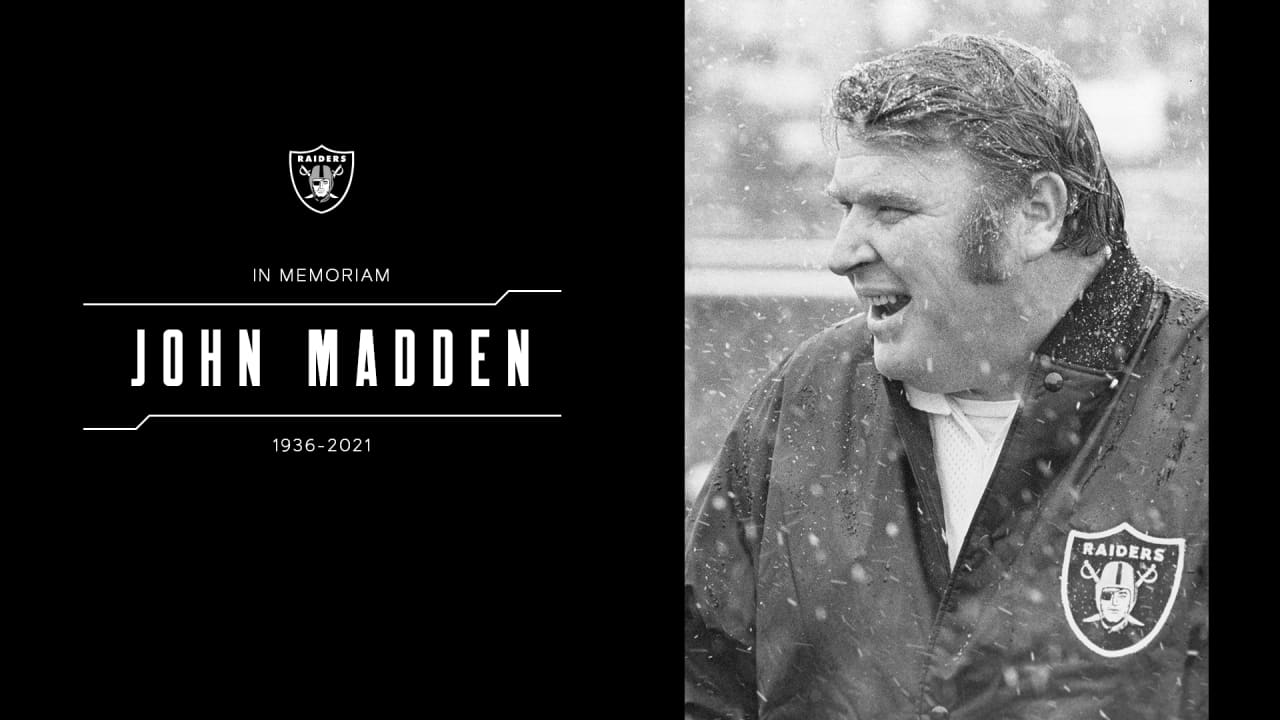 The Raiders Family is deeply saddened by the passing of the legendary John Madden.
Few individuals meant as much to the growth and popularity of professional football as Coach Madden, whose impact on the game both on and off the field was immeasurable.

Hired as Head Coach of the Raiders by Al Davis at the age of just 32, Madden coached the Silver and Black for 10 seasons and compiled a remarkable 103-32-7 regular season record. From 1969-78, the Raiders posted winning records in each season, won seven division titles and qualified for the playoffs eight times. In 1976, Madden coached the Raiders to a 13-1 record and a 32-14 triumph over the Minnesota Vikings in Super Bowl XI, marking the franchise’s first World Championship of Professional Football.

As professional football grew in popularity and influence, Madden and his Silver and Black teams played a significant role in some of the AFL and NFL’s seminal moments, including the “Sea of Hands,” “Immaculate Reception,” “Holy Roller” and “Ghost to the Post,” among others. Madden cemented his role as a football icon in the broadcast booth, serving as a leading color analyst for all four major television networks—CBS, FOX, ABC and NBC. His work on Monday Night Football, the inception of the annual All-Madden Team and his role in the Madden NFL series of video games made the Madden name synonymous with pro football.

In 2006, Madden was presented for enshrinement to the Pro Football Hall of Fame by Al Davis, who opened his speech by calling Madden, “A brilliant coach. A loyal and trusted friend. A Raider.” The thoughts and prayers of the Raider Nation are with Virginia, Joseph, Michael and the entire Madden family at this time.

Sarah Palin, Who is Unvaccinated, Dined Outdoors in N.Y.C. After Testing Positive – The New York Times

Sarah Palin, Who is Unvaccinated, Dined Outdoors in N.Y.C. After Testing Positive – The New York Times