Sen. Angus King, I-Maine, has made clear he is concerned about what happened at the U.S. Capitol on Jan. 6. Senate Television via AP hide caption 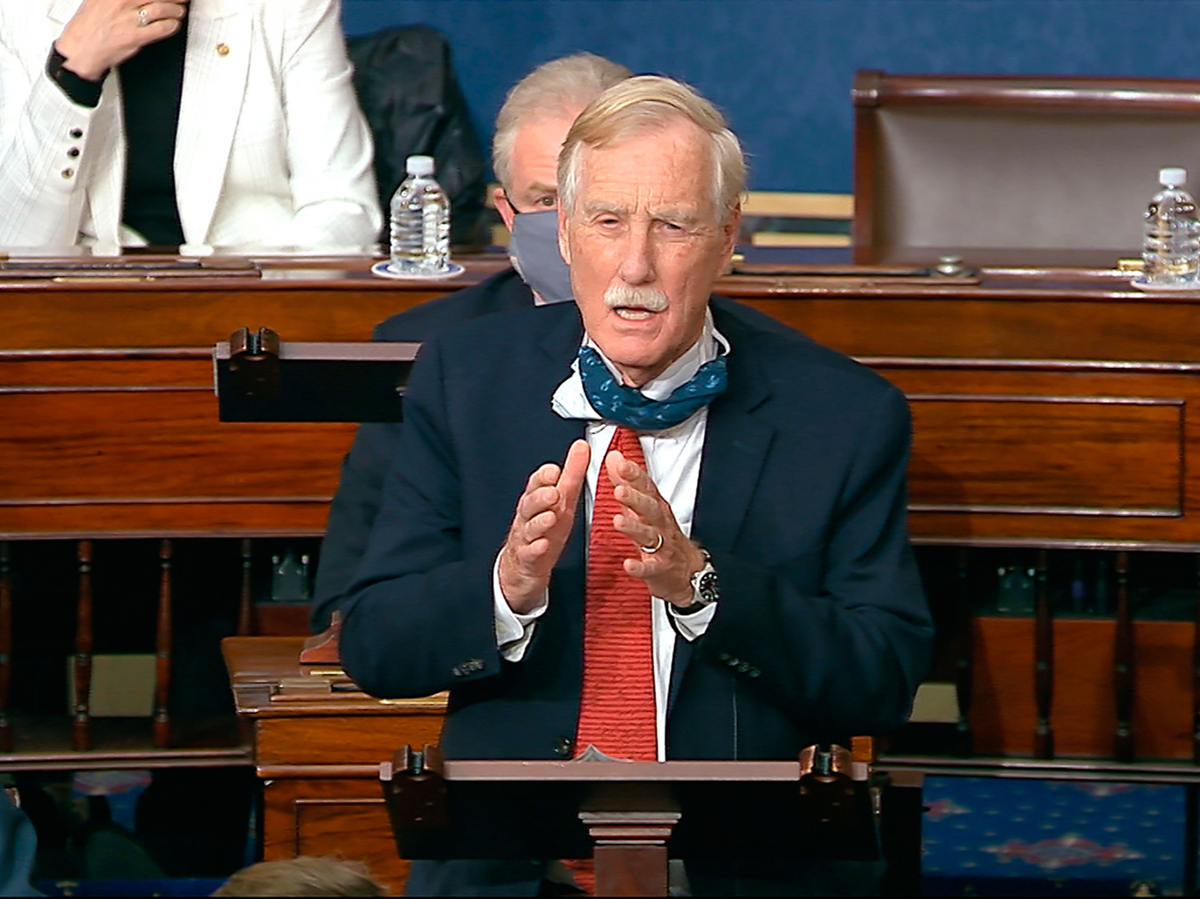 Sen. Angus King, I-Maine, has made clear he is concerned about what happened at the U.S. Capitol on Jan. 6.

Democrats on Monday evening will carry impeachment papers from the House to the Senate to officially mark the start of the second impeachment trial against former President Donald Trump. The article accuses Trump of inciting the Jan. 6 insurrection at the U.S. Capitol.

Then, the Senate trial will begin Feb. 9. Assuming that both Senate Independents vote for impeachment, Democrats will need the support of 17 Republicans.

Sen. Angus King, I-Maine, has made clear he is concerned about what happened on Jan. 6 and that he supports the House’s effort to impeach Trump. He tells NPR’s Morning Edition he is thinks two pieces of evidence need to be developed at the Senate trial.

“One is, what did the president know that morning when he addressed that crowd? What did he have in terms of intelligence?” he says. “The second is, what did he do that afternoon to quell it once we knew that the Capitol had been stormed? … I think those two facts will have an influence on the outcome of this trial.”

Though he did not directly answer how he will vote, he has previously indicated he supports impeachment.

Senate Democrats have stressed that the process must move forward even though Trump has left office. Republicans have questioned the constitutionality of the process have also said that in an already fractured country, moving forward with impeachment makes those tensions worse.

The following are highlights of the interview:

I’d like you to respond to a Fox News Sunday clip of Sen. Marco Rubio saying the coming impeachment trial is like “taking a bunch of gasoline and pouring it on top of the fire.”

It strikes me as a little disingenuous for people who have been building the fire and throwing gasoline on it for months to suddenly say “Oh, no, no, we have to stop now. We have to have unity.” These were the people that were spreading disunion. I’m not talking about Marco himself but generally the president of course and many of his allies in Congress so to say now that we have to forget about it and shove under the rug one of the most egregious assaults on American democracy in our history in the name of unity when the folks who are saying that weren’t so interested in unity a couple of months ago.

You were on a call Sunday with a bipartisan group of lawmakers and the White House about President Biden’s $1.9 trillion COVID relief package. What came out of that meeting?

The fact that the meeting even happened was was something that hasn’t happened in recent years where you had a genuine, open, free discussion between the White House and a bipartisan group of senators that I haven’t seen that recently. So I think that’s positive in itself.

I’d call it more exploratory than definitive. There were a lot of questions. This group … really wanted the data. …

There was general consensus, however that we’ve got to do whatever we have to do to speed up the vaccination process. I don’t think there’s going to be any debate about that.

When can Americans expect relief?

We are going to try and do something between now and the time of the impeachment trial beginning. That’s a tall order because we also have to do the confirmations. … It’s a big deal. There’s a lot of money, and this isn’t Monopoly money. We’re borrowing this money from our grandchildren.