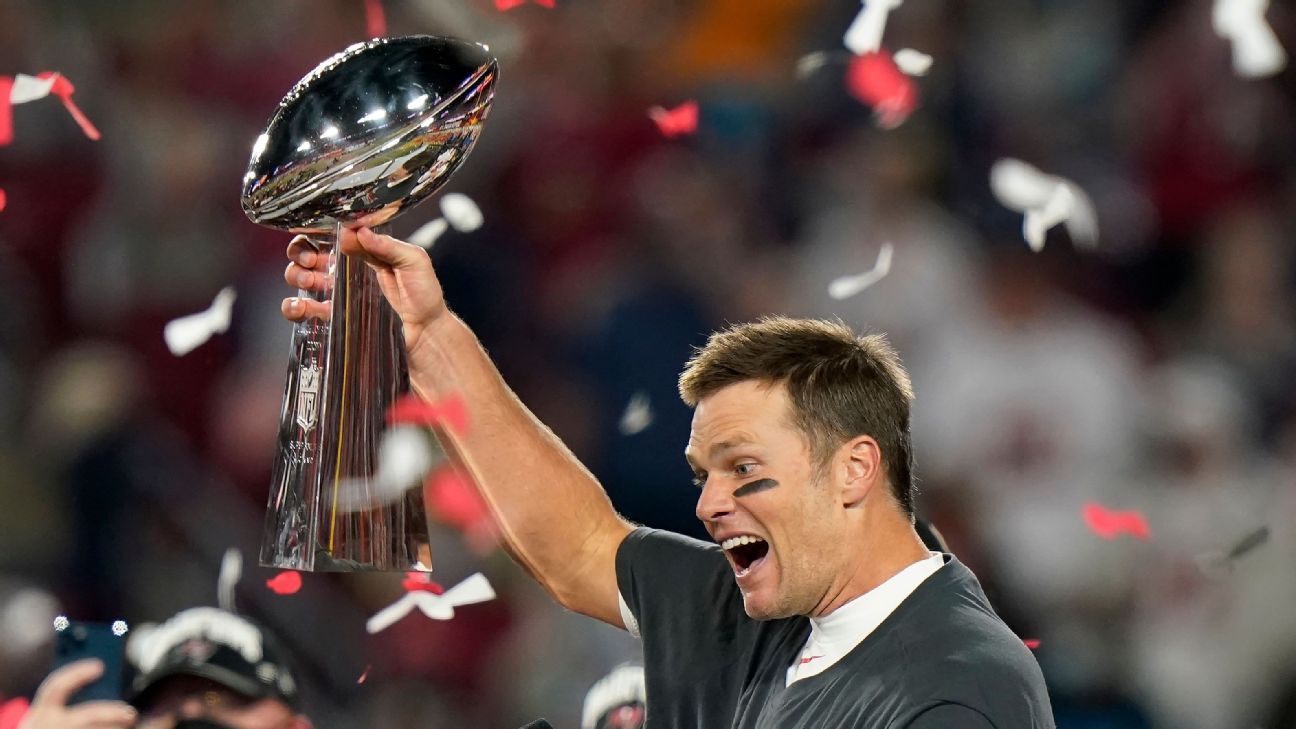 Brady, the 43-year-old quarterback who went to Tampa Bay for the final chapter in a first-ballot Hall of Fame career, proved he’s still the most dominant quarterback in the league by throwing for 201 yards and three touchdowns and earning his fifth Super Bowl MVP award and seventh ring as the Buccaneers beat the Kansas City Chiefs 31-9 for their first Super Bowl win since 2003.

With the win, Brady has more Super Bowl titles (7) than any franchise in NFL history, topping the six each won by the Steelers and Patriots. Brady also made history with his fifth MVP award, becoming the only player with five. Joe Montana is second with three.

“This team is world champions forever, you can’t take it away from us,” Brady said after the game.

When asked if he would return next season, he added: “We’re coming back.”

Brady joked with Chiefs wide receiver Tyreek Hill in July that he would go for his seventh ring after Hill promised a Chiefs dynasty with seven of their own. With the win, Brady is 3-2 against Patrick Mahomes. His first two wins came in games in which he built a double-digit lead by half and held off furious Chiefs comebacks.

This time, though, there would be no comeback.

There would be just Brady and the talented teammates he lured to Tampa Bay when he went south to prove he was more than a piece in a Bill Belichick dynasty. The win shows he’s the kind of transcendent player who doesn’t need one particular organization to build a dynasty. He can do it anytime, anywhere, in any uniform.

He did it Sunday with tight end Rob Gronkowski — a longtime Patriots teammate he convinced to come out of retirement with promises of sunshine and another Super Bowl ring — and Leonard Fournette, whom he convinced to sign in Tampa Bay after the former first-rounder was cut by the Jacksonville Jaguars.

And he did it with Antonio Brown, the troubled wide receiver who wanted another shot in the NFL and was given refuge by a quarterback who wanted one more talent in an offense that had almost everything.

Gronkowski followed his friend to Florida and was rewarded with the first two touchdowns of the evening. His pair of scores, one on an option play 8 yards from the goal line and the other a 17-yard reception, pushed the Buccaneers so far ahead of the Chiefs that Kansas City’s field goal counters weren’t enough.

“Great to see big time players making big time plays,” Brady said. “Just love what they did, what they added to the team. Gronk is an unbelievable player, teammate, talent, work ethic, commitment. And AB is just, since he got here, he’s done everything the right way. So impressed by him. Proud of him.

“It takes a lot of people to get to this point, and we all have great support systems in place, and I think everyone should be celebrating them tonight.”

In a game billed to be the changing of the guard between Brady, the original GOAT, and Mahomes, the future GOAT, the veteran quarterback was lethal as he efficiently picked apart the Chiefs’ defense. He completed 10 of 13 passes for 90 yards with three touchdowns in the first half, two to Gronkowski and one to Brown with less than a minute to go until halftime.

Though younger superstar quarterbacks are on the cusp of taking over the league, Brady defied the trend during the regular season, and he didn’t stop until he captured his seventh Super Bowl ring in his new home stadium surrounded by fans who embraced the quarterback as their own.