Chicago Teachers Union leaders appear outside City Hall with a list of their demands and a box of coal in December. As of Tuesday, the union has failed to reach an agreement with Chicago Public Schools on a return to in-person learning. Max Herman/NurPhoto via Getty Images hide caption 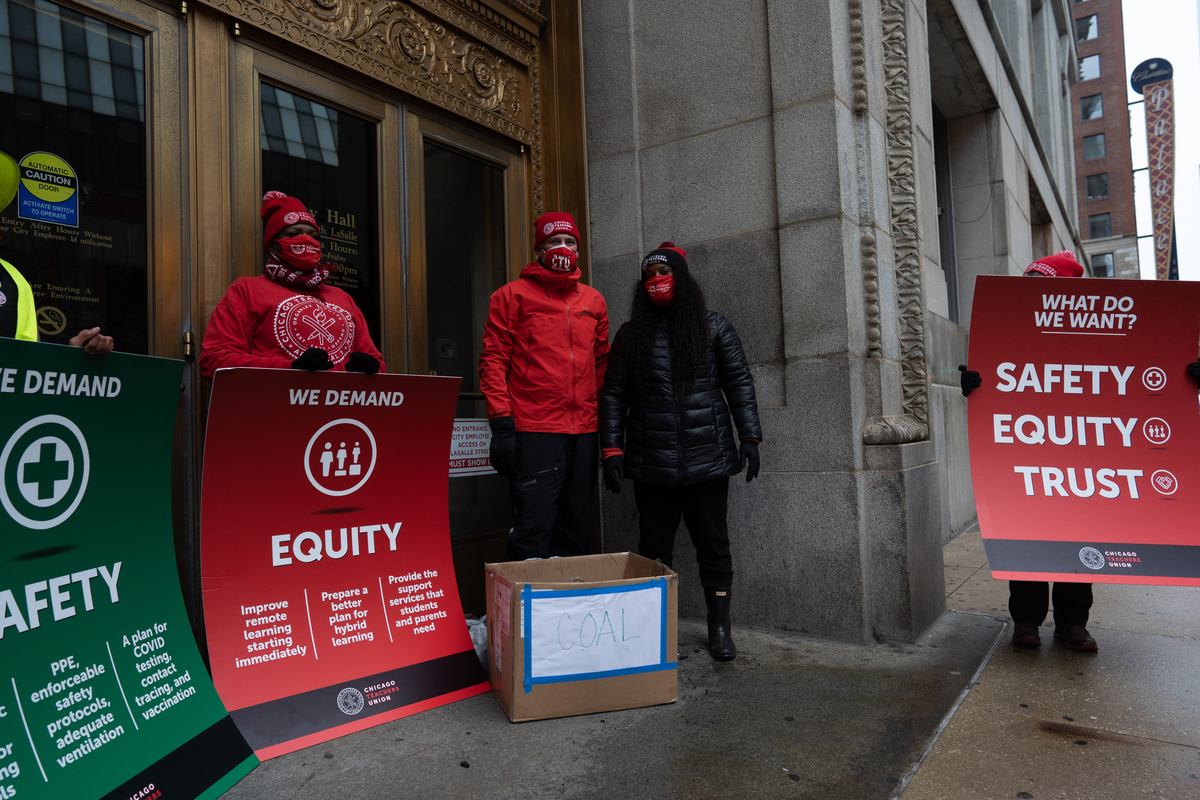 Chicago Teachers Union leaders appear outside City Hall with a list of their demands and a box of coal in December. As of Tuesday, the union has failed to reach an agreement with Chicago Public Schools on a return to in-person learning.

Diana Muhammad, who teaches PE and dance in Chicago Public Schools, was “unsure,” “uncertain” and “reluctant” about her district’s plan for in-person classes starting Monday. At a Chicago Teachers Union press conference earlier this month, she said the plan felt “rushed.” And then things got really scary.

“Over the winter break, my life was devastated when my daughter, who was sick with various symptoms all over the place for an entire week, woke up one morning and could not see.”

Her daughter ended up in intensive care for a week, she said. It turned out to be a case of multisystem inflammatory syndrome, or MIS-C. That’s an extremely rare, and very dangerous, complication of COVID-19 found in children, particularly in Black and Latino children. Noting this disparate impact, and the fact that Chicago Public School students are about 90% nonwhite, Muhammad said, “Now I am seriously concerned about us rushing back without having a well thought-out plan.”

The idea that opening Chicago’s school buildings in February 2021, 11 months after they shut down, constitutes “rushing back” would be news in most of the country. As of the third week of January, 58% of students nationwide were in districts with at least some in-person learning. That’s according to the organization Burbio, which scrapes a selection of school websites for the data. And that’s actually a growing number. Burbio reported that late January brought the biggest drop in “virtual-only” students since September. Many districts opened up school buildings again after closures brought on by holiday-related spikes.

However, Burbio estimates about a third of the country’s students have not had a single day in school since last March. This includes much of the West Coast, the Mid-Atlantic and some big cities like Chicago, Philadelphia, Cleveland and Atlanta.

In some of those districts, trying to open up for the first time right now is like spitting into a freezing wind (without a mask). On Tuesday, the Chicago Teachers Union and CPS failed to reach a deal on school reopening, triggering plans for 14,000 school staff to refuse to report to schools on Wednesday, and opening the door for a strike.

In Montclair, N.J., an affluent New York City suburb, teachers also refused to come to work, leading the district to abandon its opening plans set for this past Monday. And Washington, D.C., appears headed for a similar showdown over a Feb. 1 opening date. In all three places, this is only the latest in a series of torn-up reopening plans.

The terrible and mounting toll of the pandemic has caused positions to harden on both sides of the reopening debate. For districts that pledged in the summer or fall to reopen when coronavirus numbers got better, there are many cases where the numbers haven’t cooperated.

“There is little likelihood the low-income communities we serve, which have been hit hardest by the virus, will meet the proposed ‘Safe Schools for All’ COVID guidelines by February 1st,” Los Angeles Unified Superintendent Austin Beutner told his community on Monday. “Many experts say even March 1st is unlikely, given current health conditions. Sadly, COVID numbers remain at dangerously high levels in nearly every category – infections, hospitalizations and deaths.”

Up to now, there has been no centralized data collection on cases, outbreaks and mitigation measures in U.S. schools — something President Biden has just ordered federal agencies to begin doing. Still, there is an emerging scientific consensus that schools can be safe, given the right precautions, even when community spread is high.

On Tuesday, three Centers for Disease Control and Prevention scientists released a review of U.S. and international evidence in the Journal of the American Medical Association making just this point: “Accumulating data now suggest a path forward to maintain or return primarily or fully to in-person instructional delivery.” With precautions, and canceling higher-risk activities such as athletics, the paper said, reopening can be safe. Separately, the CDC itself released a study of schools in Wisconsin that found even when cases were spiking in the community, there were just 7 cases among nearly 5,000 students and zero cases among staff. That’s with more than 9 out of 10 students reportedly wearing masks.

With heartbreaking experiences like Diana Muhammad’s to share, teacher unions in some places have rallied around the cry “#onlywhenitssafe.” But “safe” means trusting management to report cases, sanitize buildings, improve ventilation — and multiple rounds of negotiations have detonated old landmines of mistrust and mistreatment.

In Chicago, for example, the tug of war between the union and the school district goes back to March. Administrators, Mayor Lori Lightfoot and the head of the Chicago department of public health did not initially want to close schools. But, just after the union held a press conference calling for schools to be closed in March, Illinois Gov. JB Pritzker made the call that schools would be shut down statewide.

Yet, for much of the past year, CPS officials have insisted — and still insist — that the union cannot dictate whether schools are open or not.

In Washington, D.C., teachers explain their hesitation to go back to in-person learning by citing historic educational inequities.

“East of the river, things are dictated to us,” says teacher union activist Laura Fuchs, referring to a majority Black, high poverty area of the city. “The [school] bathroom has not had a working soap dispenser since the building opened … they don’t seem to care.”

D.C. Public Schools told NPR over email, “We are proud to have worked collaboratively with the Washington Teachers’ Union on an agreement reached in December that represents our shared commitment to ensuring students have the high-quality education and supports they need to thrive, and our teachers and staff feel safe and prepared to return to school buildings.”

The goalposts on “safe” also seem to keep moving. Now that vaccines are out, some teachers say they will agree to return to work in person only when fully vaccinated, which could take months.

University of Washington epidemiologist Helen Chu, who became known early in the pandemic for detecting the first signs of local transmission in the U.S., endorsed that position recently on a public panel:

“Get the teachers vaccinated, that’s clearly important and can be done right now, and at that point, that’s when we reopen.”

In at least one state, Ohio, Gov. Mike DeWine is asking superintendents to sign a pledge to resume in-person instruction by March 1, as a condition of their staff receiving priority access to the vaccine.

Grace Lee, chief medical officer for practice innovation and a pediatric infectious disease physician at Stanford Children’s Health, advised the CDC on coronavirus vaccine priorities. Her position differs from Chu’s: “Clearly, both schools in the U.S. and schools in other countries have been able to effectively reopen,” she says. With multiple “swiss cheese” layers of precautions, including masking, distancing, handwashing and ventilation, she says school can be relatively safe; the vaccine is one more layer.

As the months drag on without the in-person learning, the specialized services, the social opportunities, the hot meals or the child care that schools provide, some parents have organized under hashtags like #openschools.

Lisa Cohen, a parent of a kindergartner in D.C., is one of them.

“It’s fear-based,” she says of the drive to stay remote. “Like if it was science-based, fact-based, data-based, we could put out a metric or we could look at the data and decide when we get there and when it’s safe. But it has become an emotional conversation. It’s become a political conversation. And I don’t know where and how you end those.”

These open school advocates have marshalled the support of many pediatricians, as in this open letter. They point to the many states where schools are mostly open — like Florida, Georgia and Texas — yet cases have started to come down again in the last few weeks, as they have elsewhere.

A mountain of makeup work ahead

In many late-opening districts, only a minority of families have signaled interest in changing their current remote school and childcare arrangements in favor of a few days a week of in-person learning, sometimes with a different teacher than they’ve been working with all year.

The Washington Post reported over the weekend that 5,200 D.C. students had signed up for in-person classes, in a district of around 50,000. In Chicago, the district said it planned to bring about 70,000 elementary school students back, out of about 280,000 total students enrolled.

“We’re going back once a week, with a group of students placed in a cohort, to do a combination of remediation, test prep, makeup work.”

Even as the voices get louder, the time remaining in this school year dwindles, and the pile of makeup work for everyone is just getting bigger.