Thousands of people rallied against the military takeover in Yangon, Myanmar’s most populous city, on Sunday. They demanded the release of Aung San Suu Kyi, whose elected government was toppled by the army that also imposed an Internet blackout. AP hide caption 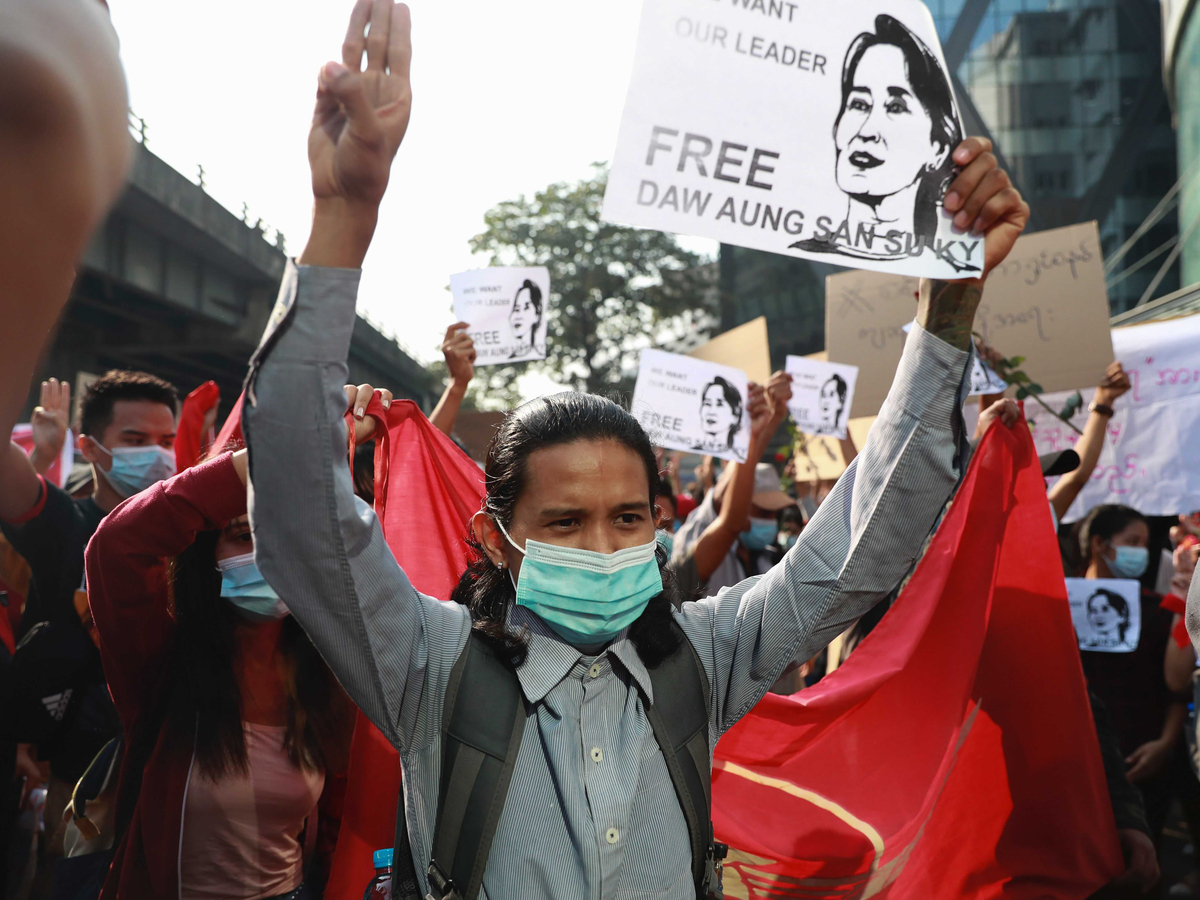 Thousands of people rallied against the military takeover in Yangon, Myanmar’s most populous city, on Sunday. They demanded the release of Aung San Suu Kyi, whose elected government was toppled by the army that also imposed an Internet blackout.

Tens of thousands of protesters rallied in Myanmar on Sunday demanding an end to the military coup and release of de facto leader Aung San Suu Kyi, who was detained alongside other elected officials in last week’s military takeover.

Protesters carried banners reading “Respect our vote,” the BBC reports, a reference to a landslide victory by Suu Kyi’s party in a Nov. 8 election. Military leaders justified their takeover claiming, without evidence, that the vote was fraudulent. One demonstrator, quoted by the BBC, called Suu Kyi “our true leader.”

“She is our only hope for our democracy. If she died or something happened to her, what is our future? We really need her back,” the protester told the BBC.

Prominently on display was the three-fingered salute, a gesture borrowed from The Hunger Games series that’s become a widespread symbol of defiance in the coup’s aftermath. Passing motorists honked in support as protesters threw out the borrowed symbol during the day’s largest demonstration.

“We don’t want a dictatorship for the next generation,” one protester, 21-year-old Thaw Zin, told Reuters. “We will not finish this revolution until we make history. We will fight to the end.”

Protesters in Yangon made their way from every corner of the city, Reuters reports, to Sule Pagoda, at the city’s center, which has been a focal point of 2007 monk-lead protests and other movements within the country. 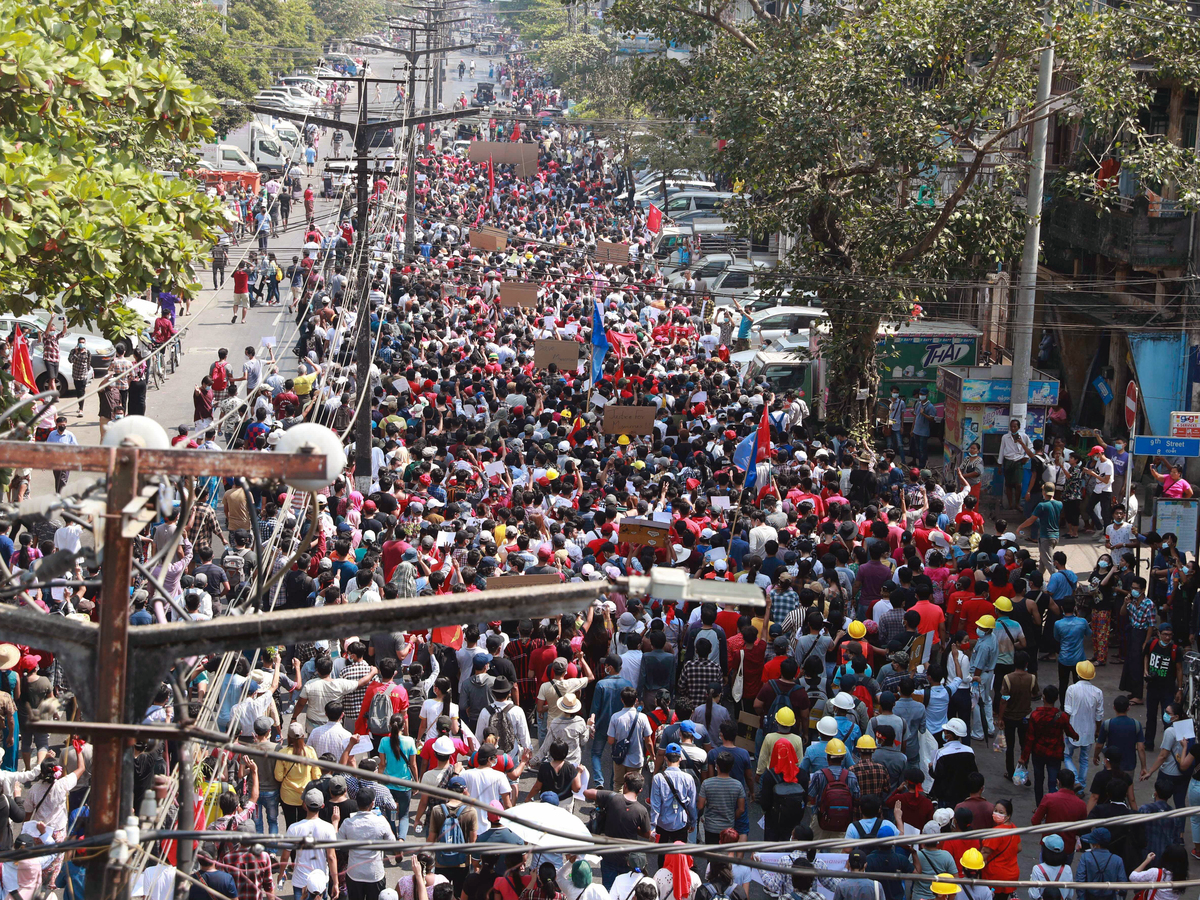 Protesters march toward Sule Pagoda in Yangon on Sunday.

Armed police with riot shields set up barricades but did not otherwise interfere with the protests.

The protests marked the second straight day of demonstrations in Yangon, coming close to a week after the Feb. 1 coup which ended a roughly decade-old democracy in Myanmar and put the military’s Commander in Chief Min Aung Hlaing in power.

Sunday’s protests were the largest since the so-called Saffron Revolution in 2007, which led to bloody crackdowns by the military.

A day before the protests, the military leadership had put in place a day-long Internet blackout, which appeared to ease on Sunday.

In Mandalay, the country’s second-largest city, tens of thousands marched to express their support for the civilian-elected government and decry the military takeover, The Myanmar Times reports. In the capital, Naypyidaw, a city built at the direction of military generals, marchers were joined by hundreds of motorcyclists, both the Myanmar Times and New York Times report. 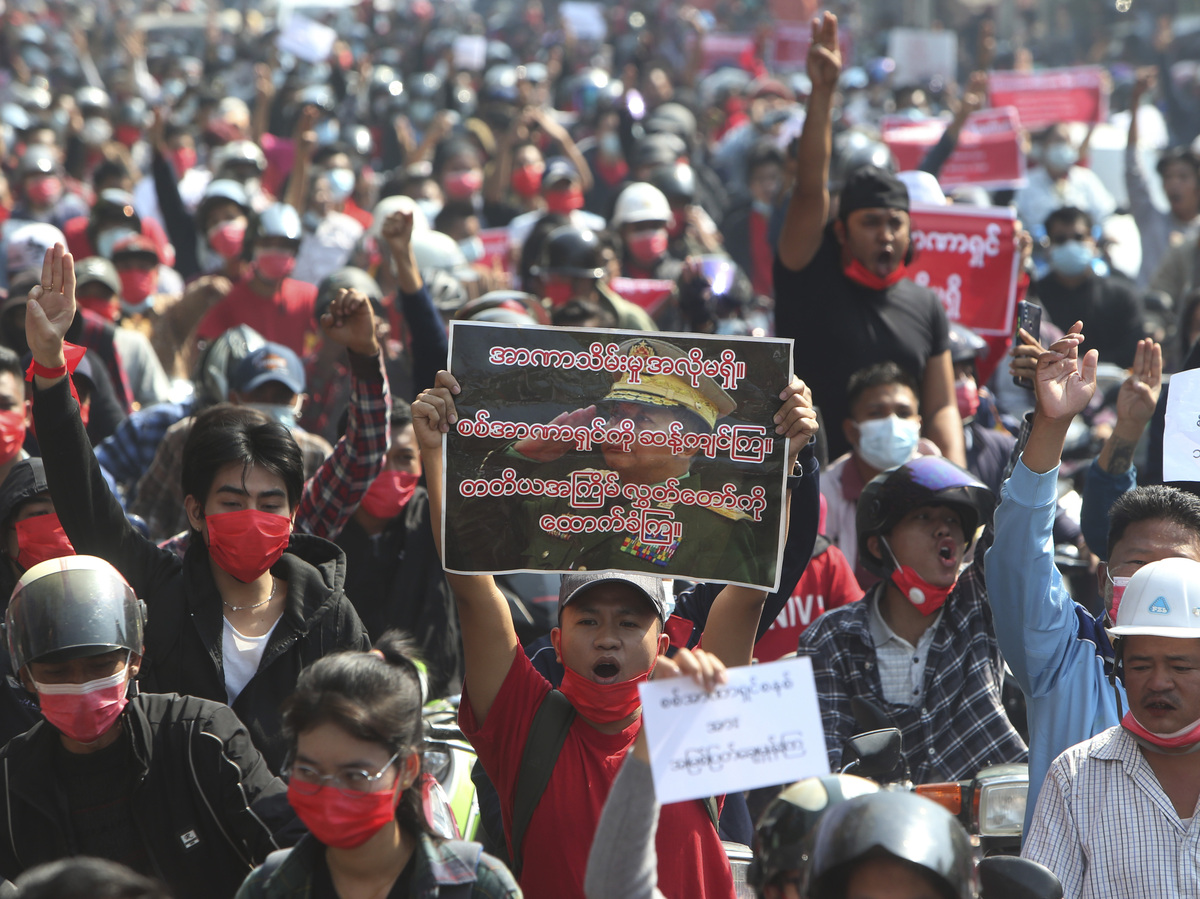 A protester shouts slogans while holding a placard with an image of Myanmar military Commander-in-Chief Senior Gen. Min Aung Hlaing as fellow protesters march around Mandalay on Sunday.

Demonstrations were also held in nearby Bangladesh, where thousands of Rohingya Muslims are settled in refugee camps following the bloody military crackdown on the ethnic-minority, The New York Times reports. That support came despite past criticism of Suu Kyi — a Nobel Peace laureate — for inaction during the ethnic cleansing.

“They killed Rohingya, they tortured us and we haven’t forgotten those brutal days,” Abdur Rahim, who lives in the Kutupalong camp, the world’s largest refugee settlement, told the Times. “We express solidarity with those who are protesting against the military government in Myanmar.”

There were few reports of violence during the day’s demonstrations, although earlier gunshots were reportedly fired in the Myanmar border town of Myawaddy. The BBC cites local media outlets which report that police had used rubber bullets to break up a rally.

Myanmar’s military did not comment on Sunday’s protest and has largely been silent over the growing opposition to the coup. The U.S. and United Nations have repeatedly denounced the takeover.

In the aftermath, the military has also charged Suu Kyi with illegally importing walkie-talkies and she reportedly will be kept in detention until at least Feb. 15. Reuters adds that at least 160 people have been detained since the military seized power, according to the U.N.