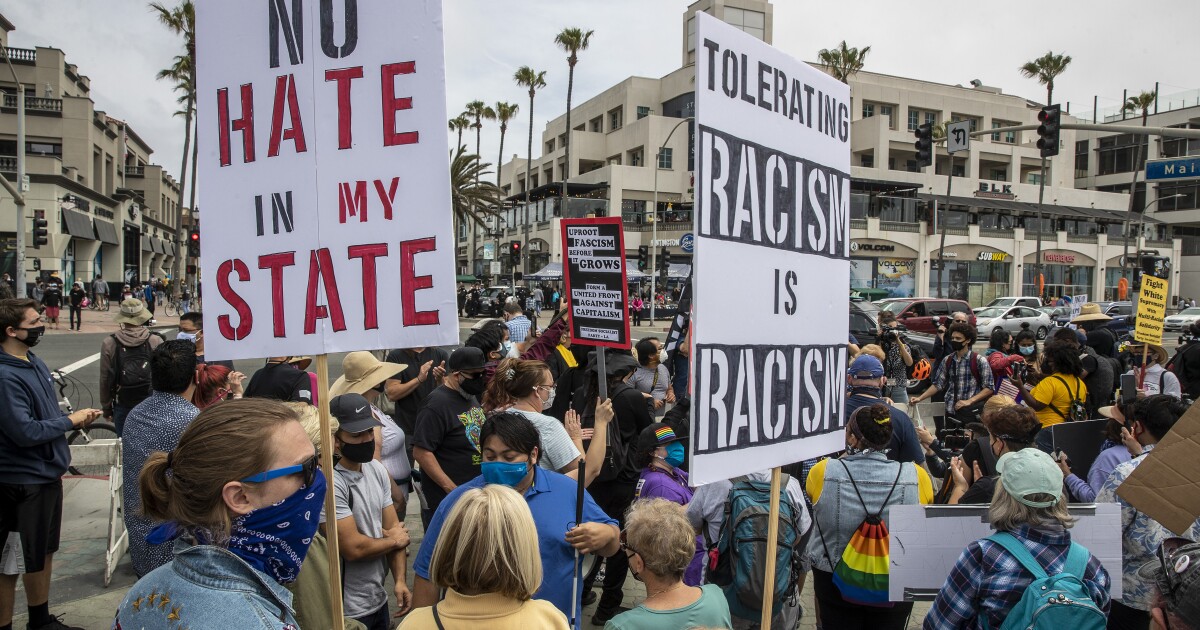 Huntington Beach police declared an unlawful assembly Sunday afternoon around the city’s famous pier as tensions increased among protesters who clashed with Donald Trump supporters and others displaying allegiance to white supremacist groups.

Several hundred people gathered in the plaza area at the base of the pier beginning Sunday morning to demonstrate against the so-called White Lives Matter rally that was set to start at 1 p.m. Police officers stood at the edges of the pier plaza as helicopters and drones circled overhead.

But by 2:30 p.m., police had declared the gathering an unlawful assembly and directed everyone to disperse as tensions heated up among rival demonstrators. Authorities also sent an alert to people’s cell phones in the area ordering them to leave or face arrest.

The protest, which began around 11 a.m., started out peacefully. No large cohorts of people who were expected to attend the scheduled white supremacy rally were present at the pier by Sunday afternoon. However, as the day went on and the crowd swelled, small confrontations between individual attendees, Trump supporters and counterprotesters broke out along Pacific Coast Highway and Main Street. Some traded punches, while others threw verbal jabs within inches of each others faces.

Diners eating lunch watched the chaos unfold from a second floor patio at Fred’s Mexican Cafe and Cantina, which overlooks the intersection of Main Street and Pacific Coast Highway.

The scuffles prompted Tory Johnson, founder of local grassroots group Black Lives Matter Huntington Beach, to consider shutting down the counterprotest to make it clear the group was not there to incite a riot, he said. Despite the mounting chaos, he said the group had succeeded in reclaiming the space at the pier.

“No Nazis are going to be a reflection of Huntington Beach today,” he said.

The situation reached a boiling point shortly after noon when a man with a beard and cigar approached the plaza in front of the pier and repeated, “white lives matter,” several times before yelling at a counterprotester, who held a poster that read “Death to the Klan.”

A crowd quickly converged around them and chanted, “Nazis go home,” until the man retreated across Pacific Coast Highway.

In a separate incident, Peter Zazzara, 59, and several counterprotesters got into a shouting match when Zazzara was questioned about a skull tattoo on his right arm. Zazzara got angry and began cursing at the group, eventually crossing his arms to cover the ink, which he said represented being part of “an elite military unit.” However, the Anti-Defamation League classifies the tattoo — known as the Totenkopf, or Death Head — as a hate symbol. The image was used by the SS organization and has been adopted by neo-Nazi’s and white supremacists since World War II, according to the ADL.

The crowd began to again grow agitated around 1 p.m. when a small group of people waving Trump 2020 flags, American flags and a banner that read “Don’t tread on me” congregated across from the plaza at the base of the pier.

At least 10 mounted police officers and Orange County sheriff’s deputies gathered on Pacific Coast Highway as people began spilling into the street. A standoff occurred when a man, waving an “All lives matter” flag, began to approach the counterprotesters. He was quickly surrounded and herded away from the pier amid chants of “You are not welcome here.”

“It’s not that Black lives don’t matter but it’s about knowledge and truth,” he said. He argued that BLM only creates “racial divisiveness.”

Many who arrived at the pier Sunday did so to show opposition to recent white supremacist activity that’s occurred in the city.

Among them was Denise Wada, a 20-year resident of Huntington Beach, who stood at PCH and Main Street with other demonstrators and her dog, Banner, a Brittany. A week ago, Wada was bothered when she learned on NextDoor, an app where residents can share information about their neighborhoods, that Ku Klux Klan fliers had been left on the doorsteps of homes in her city.

“I was horrified someone would do that,” she said.

Wada said there was discussion on her neighborhood forum that maybe it was a hoax but that, regardless of whether it was fake, it demanded a loud response.

“I can’t be quiet about that,” she said. “The point is it’s out there, and racial justice needs a louder noise.”

Johnson, the founder of a local grassroots group called Black Lives Matter Huntington Beach, stood in a suit and tie with a megaphone in hand as the crowd grew Sunday morning.

“This is going to be a pretty big day, that’s for sure,” he said.

In the distance, swimmers and volleyball players on the beach paid little attention to the rising tensions at the pier. Johnson estimated that “a couple hundred people might show up” but could not say for sure how many were expected.

“I just want to occupy this space,” Johnson said, “and put forth the message that we don’t want this to be a city of hate and division.”

Shortly after the demonstration began, police took three counterprotesters into custody. One was accused of using amplified sound and a second allegedly obstructed police and had in his backpack a metal baton, two cans of pepper spray and a knife, Huntington Beach Police Lt. Brian Smith said. A third man was also taken into custody, but Smith could not say why.

A woman was detained about an hour later after she was allegedly found with pepper spray, which is prohibited at a public assembly, Smith said.

Activist Najee Ali described the arrests as a “double standard in the way our protests have been policed … whether in D.C. or here in Orange County.”

Ali, who was wearing a shirt emblazoned with the words “I can’t breathe,” said the timing of the White Lives Matter rally was likely connected to the ongoing trial of former Minneapolis police officer Derek Chauvin. “Without question,” he said.

“I’m here from Los Angeles just to show solidarity against racism, hate and intolerance,” Ali said. “It’s important residents of Huntington Beach know they’re not alone and we stand with with them.”

Smith said they had “more staff here than usual” but could not confirm how many officers were deployed to the area. The department has a large contingency on standby, he noted.

“Our hope is that everybody can come express their free speech in a peaceful manner today,” he said.

Authorities have not been able to identify who organized the White Lives Matter event or make contact with them, he said.

The rally, which was advertised via social media, is one of several such demonstrations scheduled across the country. The rallies were organized through the messaging app Telegram, according to the Anti-Defamation League.

It comes after fliers with KKK propaganda were delivered to homes in Huntington Beach, Newport Beach and Long Beach in recent weeks. Police do not believe the same people are responsible for the fliers and the rally, Smith said.

Roger Bloom, 65, who has been living in Huntington Beach since 1975, held a sign in his left hand that read “Old White Guys Against Racism” on one side, and “No H8 in HB” on the other side. In his right hand, he held an American flag.

“I’m here to defend my city,” Bloom said. “It’s a great city full of great people. Just because a handful of pathetic losers come out here every so often to a public square and make a stink … they give this town a bad name. I wish they’d go back to their basements and stay there.”

Antonieta Gimeno, 78, said she drove down from L.A. to show solidarity with the counterprotesters.

“I’m horrified by the violence against Black people, Mexican people, Asian people,” said Gimeno, who is Mexican. “This is a small step, but the more people who stand in unity, the more we can show that in order for white lives to matter, Black lives have to matter too.”

Cliff Smith — holding a sign reading, “Death to the Klan! International working class solidarity!” — preferred to stay on the corner of Main and PCH as the counterprotesters gathered in a circle to chant.

“It’s about being visible,” said Smith, 51, of South Los Angeles. “The crowd seems like they have it under control.”

Smith stood next to his friend Jesus Portillo, 35, a resident of Orange. He held a sign that said, “End Racism.”

Portillo, who is Mexican, said he stood proudly with his sign to defend his “color, my people and the resistance.”

“I’ve experienced a lot of racism especially because me and my family are Latinos,” he said. “We’re always getting pulled over.”

Huntington Beach has been grappling with extremism for decades. In the 1980s and 1990s, its pier and surf spots became a draw for skinheads, white supremacists and neo-Nazis.

Two high-profile hate crimes in the mid-1990s solidified the city’s reputation as a hotbed of racism. In 1994, two skinheads gunned down a Black man outside a McDonald’s on Beach Boulevard. Vernon Windell Flournoy, 44, stumbled into the restaurant and collapsed in front of horrified diners.

Though Huntington Beach remains largely conservative, it is increasingly an island surrounded by growing liberalism and racial diversity. Orange County as a whole has experienced a remarkable demographic shift in the last two decades with the arrival of more Asian and Latino residents, who have helped tilt the area toward Democrats.

Experts say such demographic shifts are the strongest predictors of increases in political extremism and hate crimes in neighborhoods where some fear their way of life is under threat.

Meanwhile, the Huntington Beach City Council at its meeting last week denounced hate speech and white supremacy. The city is also hosting a virtual “Day of Unity” at the same time as the White Lives Matter rally.