Leaving Washington, D.C., behind, the Trumps board Air Force One at Joint Base Andrews in Maryland on Jan. 20, hours before President Biden’s inauguration. Pete Marovich/Pool/Getty Images hide caption 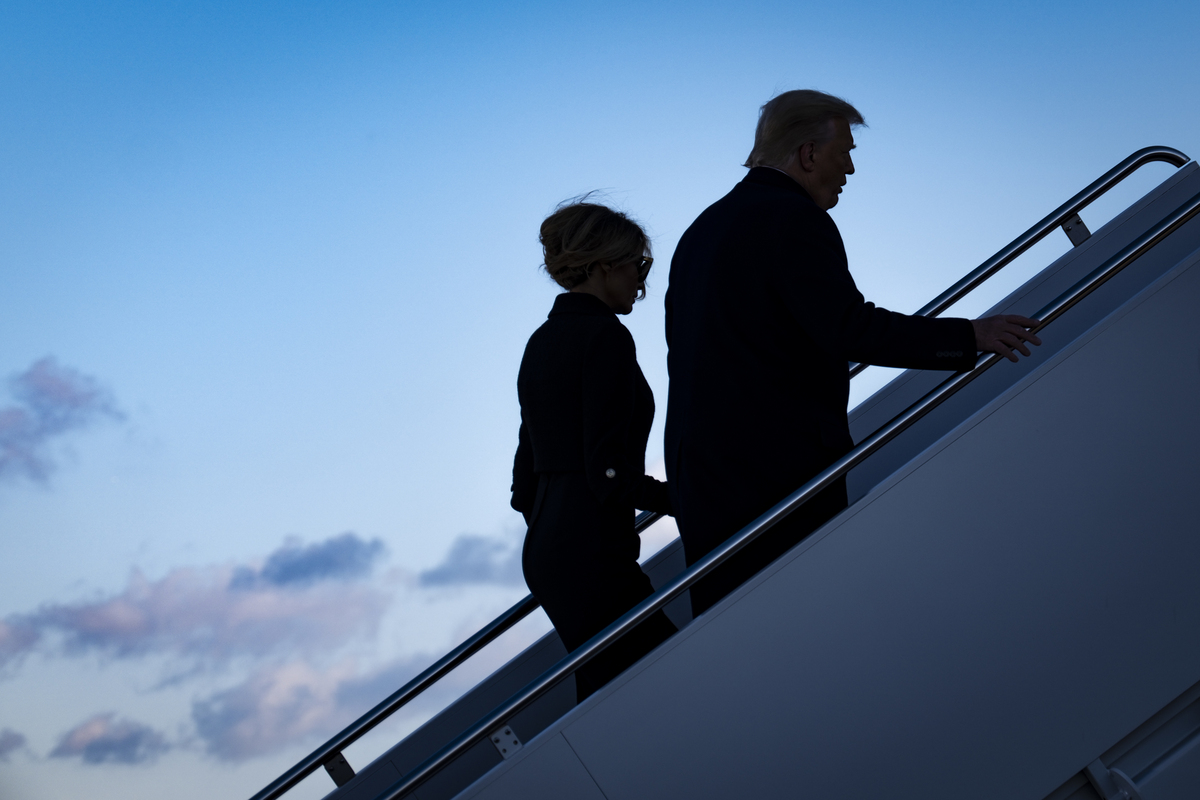 Leaving Washington, D.C., behind, the Trumps board Air Force One at Joint Base Andrews in Maryland on Jan. 20, hours before President Biden’s inauguration.

The Senate had a test vote this week that cast deep doubt on the prospects for convicting former President Donald Trump on the impeachment charge now pending against him. Without a two-thirds majority for conviction, there will not be a second vote in the Senate to bar him from future federal office.

Also this week, Politico released a Morning Consult poll that found 56% of Republicans saying that Trump should run again in 2024. As he left Washington, D.C., on Jan. 20, he said he expected to be “back in some form.”

So will he seek a comeback? And if he does, what are his chances of returning to the White House?

History provides little guidance on these questions. There is little precedent for a former president running again, let alone winning. But since when has the lack of precedent bothered Donald Trump?

Only one president who was defeated for reelection has run again. That was Grover Cleveland, first elected in 1884, narrowly defeated in 1888 and elected again in 1892.

Another, far better-known president, Theodore Roosevelt, left office voluntarily in 1908, believing his hand-picked successor, William Howard Taft, would continue his policies. When Taft did not, Roosevelt came back to run against him four years later.

The Republican Party establishment of that time stood by Taft, the incumbent, so Roosevelt ran as a third-party candidate. That split the Republican vote and handed the presidency to Democrat Woodrow Wilson.

And that’s it. Aside from those two men, no White House occupant has seriously tried to come back after leaving. Some were ready to be out of public life by the end of their time at the top. Others surely would have liked to stay longer, but they were sent packing, either by voters in November or by the nominating apparatus of their parties.

There have also been eight presidents who have died in office. Four in the 1800s (William Harrison, Zachary Taylor, Abraham Lincoln and James Garfield) were succeeded by lackluster vice presidents who were not nominated for a term on their own. Four in the 1900s (William McKinley, Warren Harding, Franklin D. Roosevelt and John F. Kennedy) were succeeded by vice presidents whose parties did nominate them for a term in their own right (Theodore Roosevelt, Calvin Coolidge, Harry Truman and Lyndon Johnson).

Each of these four went on to win a term on his own, and each then left office voluntarily. As noted above, Theodore Roosevelt later changed his mind, and Johnson began the 1968 primary season as an incumbent and a candidate but ended his run at the end of March.

A statue of President Andrew Jackson in Lafayette Square near the White House in June. Mandel Ngan/AFP via Getty Images hide caption 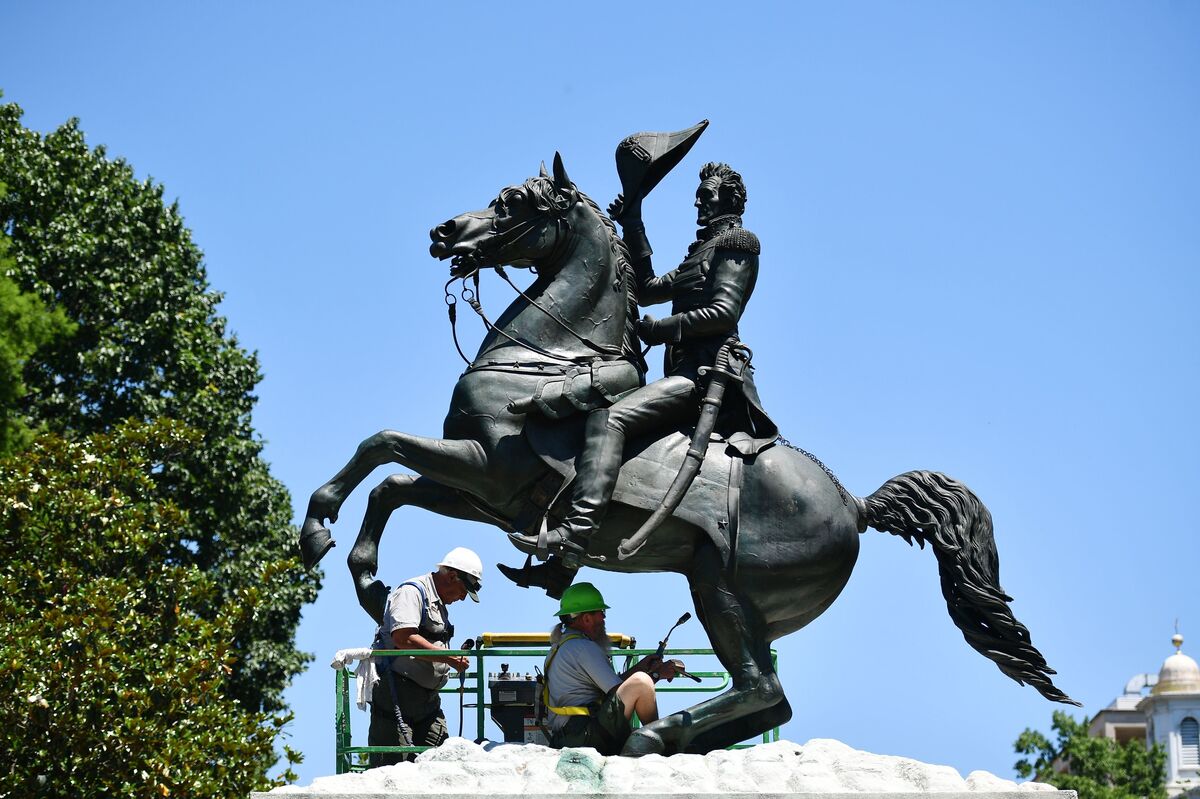 A statue of President Andrew Jackson in Lafayette Square near the White House in June.

One model that might be meaningful for Trump at this stage is that of President Andrew Jackson, who ran for president three times and arguably won each time. His first campaign, in 1824, was a four-way contest in which he clearly led in both the popular vote and the Electoral College but lacked the needed majority in the latter.

That sent the issue to the House of Representatives, where each state had one vote. A protracted and dubious negotiation involving candidates and congressional power brokers subsequently denied Jackson the prize. He immediately denounced that outcome as a “corrupt bargain,” laying the groundwork for another bid. In 1828, Jackson was swept into office, ousting the incumbent on a wave of populist fervor.

It is not an accident that Trump, following the advice of onetime adviser Steve Bannon, spoke approvingly of Jackson in 2016. When he entered the White House, Trump hung Jackson’s presidential portrait in the Oval Office overlooking the Resolute Desk.

It is not hard to imagine Trump invoking the spirit of Jackson’s 1828 campaign against the “corrupt bargain,” if he runs in 2024 against “the steal” (his shorthand for the outcome of the 2020 election, which he falsely claims was illegitimate).

Jackson, the ultimate outsider in his own time, makes a far better template for Trump than either Cleveland or Teddy Roosevelt – even though the latter two were New Yorkers like Trump. A statue of Theodore Roosevelt in New York City. After leaving office, Roosevelt tried unsuccessfully to return to the White House.

For now, Cleveland remains the only two-term president who had a time out between terms. When he first won in 1884, he was the first Democratic president elected in 28 years, and he won by the micro-margin of just 25,000 votes nationwide. He won because he carried New York, where he was governor at the time, adding its electoral votes to those of Democratic-leaning states in the South – which preferred a Democratic Yankee to a Republican Yankee.

The latter, James Blaine of Maine, was widely known as “Slippery Jim,” and his reputation made him repugnant to the more reform-minded members of his own party. Blaine was also faulted in that campaign for failing to renounce a zealous supporter who had called Democrats the party of “rum, Romanism and rebellion.” That phrase, which has lived on in infamy, was a derogatory reference to Democrats’ “wet” sentiments on the issue of alcohol as well as to the Roman Catholics and former secessionists to be found in the party tent.

Potent as it was, that language backfired by alienating enough Catholics in New York to elect Cleveland, himself a Protestant. His margin in his home state was a mere thousand votes, but it was enough to deliver a majority in the Electoral College.

After Cleveland’s first term, the election was excruciatingly close again. The salient issue of 1888 was the tariff on goods from foreign countries. Republicans were for it, making an argument not unlike Trump’s own America First rhetoric of 2016. Cleveland, on the other hand, said the tariff enriched big business but hurt consumers. He won the national popular vote but not the Electoral College, having fallen 15,000 votes short in his home state of New York.

But Cleveland scarcely broke stride. He continued to campaign over the ensuing years and easily won the Democratic nomination for the third consecutive time in 1892. He then dismissed the one-term incumbent to whom he had lost in 1888, Benjamin Harrison, who received less than a third of the Electoral College vote.

Cleveland stepped down after his second term, as other reelected presidents had seen fit to do in emulation of George Washington. The Republicans reclaimed the presidency with William McKinley in 1896 and four years later renominated him with a new running mate who brought youth and vigor to the ticket. Just 41 at the time, Theodore Roosevelt had nonetheless been a police commissioner, a “Rough Rider” cavalry officer in the Spanish-American War and governor of New York.

Less than a year into that term, McKinley was fatally shot, making Roosevelt president at age 42 (still the record for youngest chief executive). He won a term of his own in 1904 and promptly pledged not to run again. True to his word, in 1908 he handed off to his hand-picked successor, Taft.

Roosevelt did so believing Taft would continue his policies. But if Roosevelt had managed to find appeal as both a populist figure and a progressive, Taft more often stood with the party’s business-oriented regulars. So “T.R.” decided to challenge Taft for the Republican nomination in 1912.

He did well in the nascent “primary elections” held that year, but Taft had the party machinery and controlled the convention. Roosevelt led his delegates out of the convention and organized a third party, the Progressive Party (known colloquially as the “Bull Moose” party).

That fall, Roosevelt had his revenge on Taft and the GOP. The incumbent Taft finished a poor third with just eight votes in the Electoral College. But Roosevelt was not the main beneficiary, finishing a distant second to Wilson, the Democrat, who had 435 electoral votes to Roosevelt’s 88. Although the two Republican rivals’ combined popular vote would have easily bested Wilson, dividing the party left them both in his wake.

A warning to the GOP?

That is the warning some Republicans will try to apply to the prospect of another Trump candidacy down the road. If nominated, Trump would need to replicate Cleveland’s unique feat from the 1890s, and he would need to overcome the demographics and voter trends that have enabled Democrats to win the popular vote in seven of the last eight presidential cycles.

And if he is not nominated, Trump running as an independent or as the nominee of a third party would surely split the Republican vote and make a repeat of 1912 highly likely.

Nonetheless, the grip Trump has on half or more of the GOP voter base makes him not only formidable but unavoidable as the party plans for the midterm elections in 2022 and the ultimate question of a nominee in 2024.

To be clear, Trump has not said he will run again in 2024. On the day he left Washington he spoke of a return “in some form” but was vague about how that might happen. He has sent aides to discourage talk of his forming a third party.

For the time being, at least, Trump seems intent on wielding influence in the Republican Party he has dominated for the past five years – making it clear he will be involved in primaries in 2022 against Republicans who did not support his campaign to overturn the election results.

That is no idle threat. Most Trump supporters have shown remarkable loyalty throughout the post-election traumas, even after the riot in the U.S. Capitol. The fierceness of that attachment has sobered those in the GOP who had thought Trump’s era would wane after he was defeated. But Trump has been able to hold the popular imagination within his party, largely by convincing many that he was not defeated.

The results of the election have been certified in all 50 states by governors and state officials of both parties, and there is no evidence for any of the conspiracy theories questioning their validity. Nonetheless, multiple polls have shown Trump supporters continue to believe he was unjustly removed from office.

Assuming Trump is not convicted on his impeachment charge of inciting an insurrection before the Jan. 6 invasion of the Capitol, he will not face a ban on future campaigns.

Some believe Trump might still be kept out of federal office by an invocation of the 14th Amendment. That part of the Constitution, added after the Civil War with former Confederate officers in mind, banned any who had “engaged in insurrection” against the government.

But that wording could well be read to require action against the government, not just incitement of others to action by incendiary speech. It could also require lengthy litigation in federal courts and a balancing of the 14th Amendment with the free speech protections of the First Amendment.

All that can be said at this point is that the former president will settle into a post-presidential routine far from his previous homes in Washington and New York City. And the greatest obstacle to his return to power would seem to be the pattern of history regarding the post-presidential careers of his predecessors.
Source Link