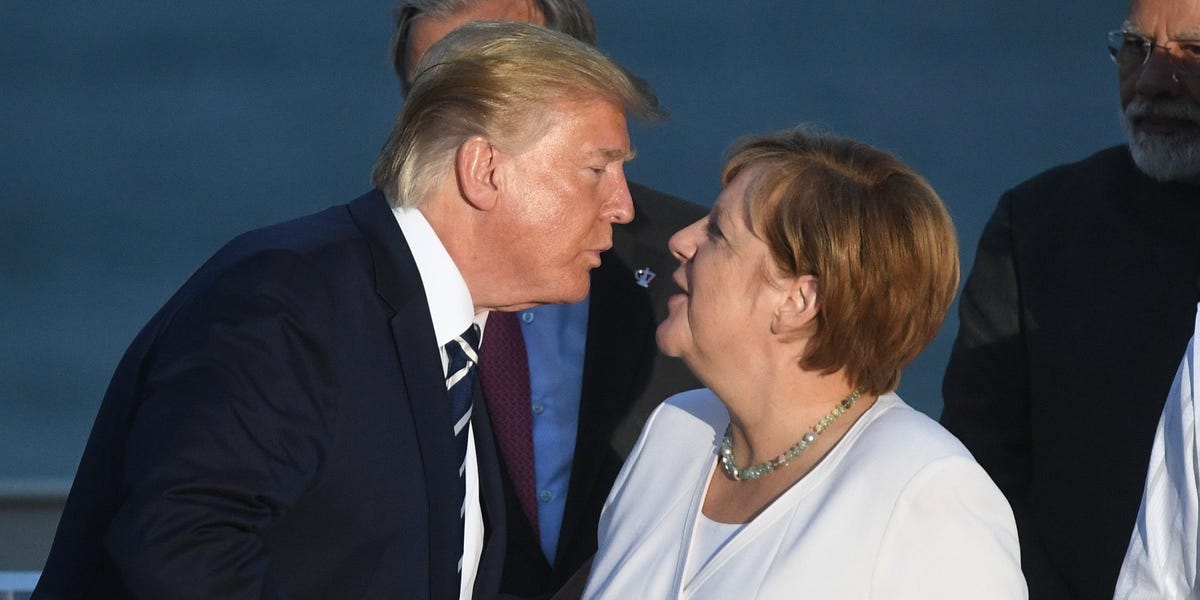 Former President Donald Trump once called German Chancellor Angela Merkel a “b—-,” according to an excerpt of a new book, “I Alone Can Fix It: Donald J. Trump’s Catastrophic Final Year,” by Washington Post journalists Carol D. Leonnig and Philip Rucker.

The book excerpt, published in CNN late Wednesday, quotes Trump during an Oval Office meeting about NATO and the US’ relationship with Germany.

“That b—- Merkel,” he reportedly told his advisors.

The former president went on to use a derogatory term for German soldiers in World War I and World War II, according to the book.

“I was raised by the biggest kraut of them all,” he added, while pointing to a framed photograph of his father on the table, Fred Trump, the book says.

Trump’s spokesman denied to Leonnig and Rucker that the former president made the comments. His office did not immediately respond to Insider’s request for comment.

The authors interviewed Trump for over two hours and spoke to more than 140 sources for the book, which comes out next Tuesday.

Trump has done plenty of post-presidential interviews for books about his final year in the White House. Yet the former president has been upset with the bombshell coverage and has dismissed some scoops as untrue, Politico reported on Thursday.

From the start, Trump and Merkel had a rocky relationship. Trump’s tendency to criticize the historic NATO alliance and fellow member countries created tensions between him in the German leader, among others. The former president repeatedly mischaracterized how NATO was funded, while raising fears that he would move to pull the US out of the alliance.

After Trump’s first NATO and G7 summits in 2017, Merkel declared that the time Europe “could completely depend on others are, to a certain extent, over.”

“I’ve experienced that in the last few days. We Europeans truly have to take our fate into our own hands,” Merkel said.

The dynamic between the two leaders continued to be contentious over the course of Trump’s tenure. Merkel excoriated Trump after he provoked the January 6 insurrection at the US Capitol, ripping into him for refusing to accept the 2020 election results.

“I deeply regret that President Trump has not conceded defeat since November, and again refused to do so yesterday,” Merkel said, underscoring that inducing doubt in the election results made the insurrection possible.

“A basic rule of democracy is: After elections, there are winners and losers. Both have to play their roles with decency and a sense of responsibility, so that democracy itself remains the winner,” Merkel added.

After 16 years of leading Germany, Merkel is preparing to step down as chancellor in September. President Joe Biden is set to host Merkel at the White House on Thursday.