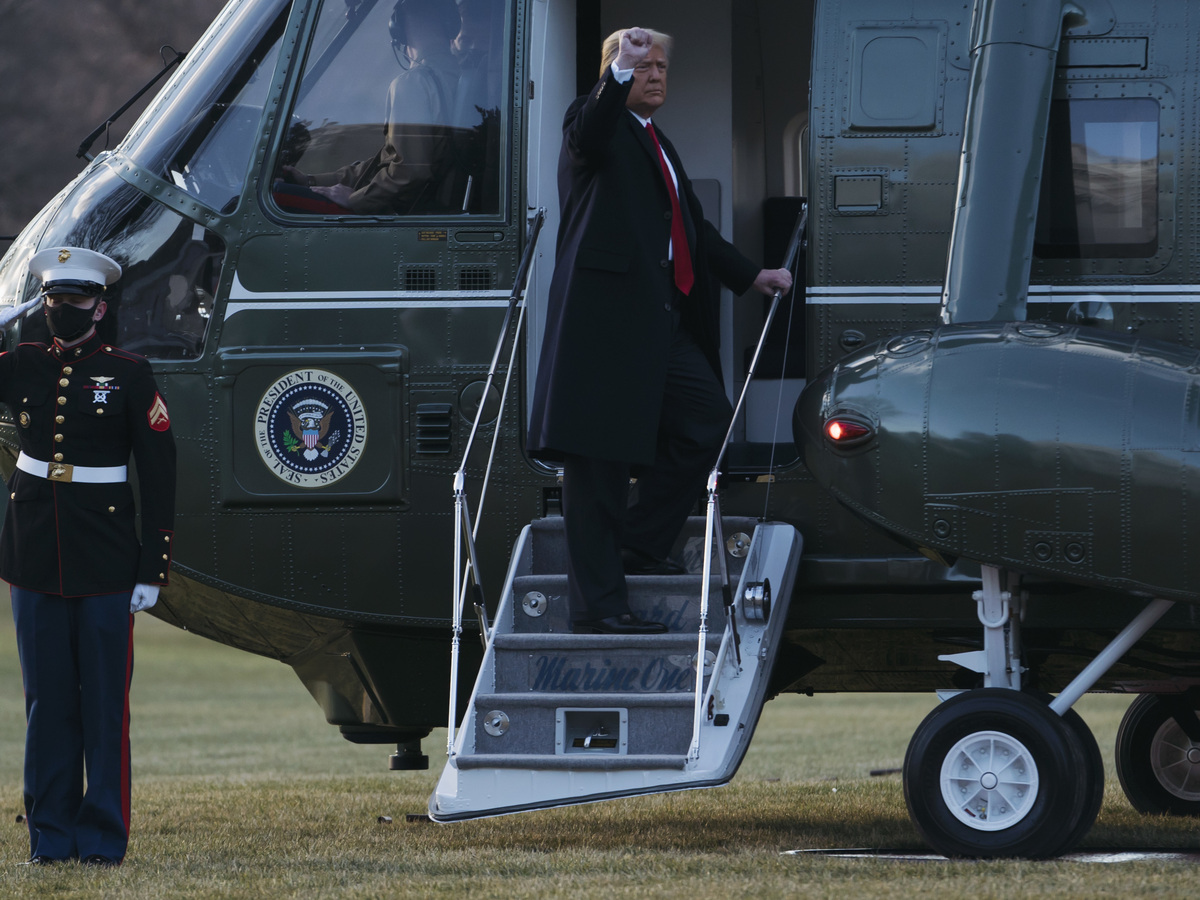 Former President Trump boards Marine One as he departs the White House on Jan. 20.

No one expected him to ride quietly into the sunset. But when Donald J. Trump vacated the White House — freshly impeached for a second time, and still insisting on the lie that the election was stolen from him by massive voter fraud — it was an open question as to how much influence he would still wield within the GOP.

After all, this latest impeachment was about Trump inciting those who stormed the Capitol, resulting in five deaths, including the killing of a police officer trying to fend off angry intruders waving Trump banners and determined to stop the certification of the 2020 Electoral College results. For all of the norm-busting outrages of his presidency, the assault of January 6 was of a far greater magnitude than what came before it.

It did not, however, mean the GOP was ready to turn the page and look ahead to a world without Trump’s influence.

A man holds up a sign against Rep. Liz Cheney, R-Wy., as Rep. Matt Gaetz, R-Fla., speaks to a crowd during a rally against her on Thursday in Cheyenne, Wyoming. Michael Ciaglo/Getty Images hide caption 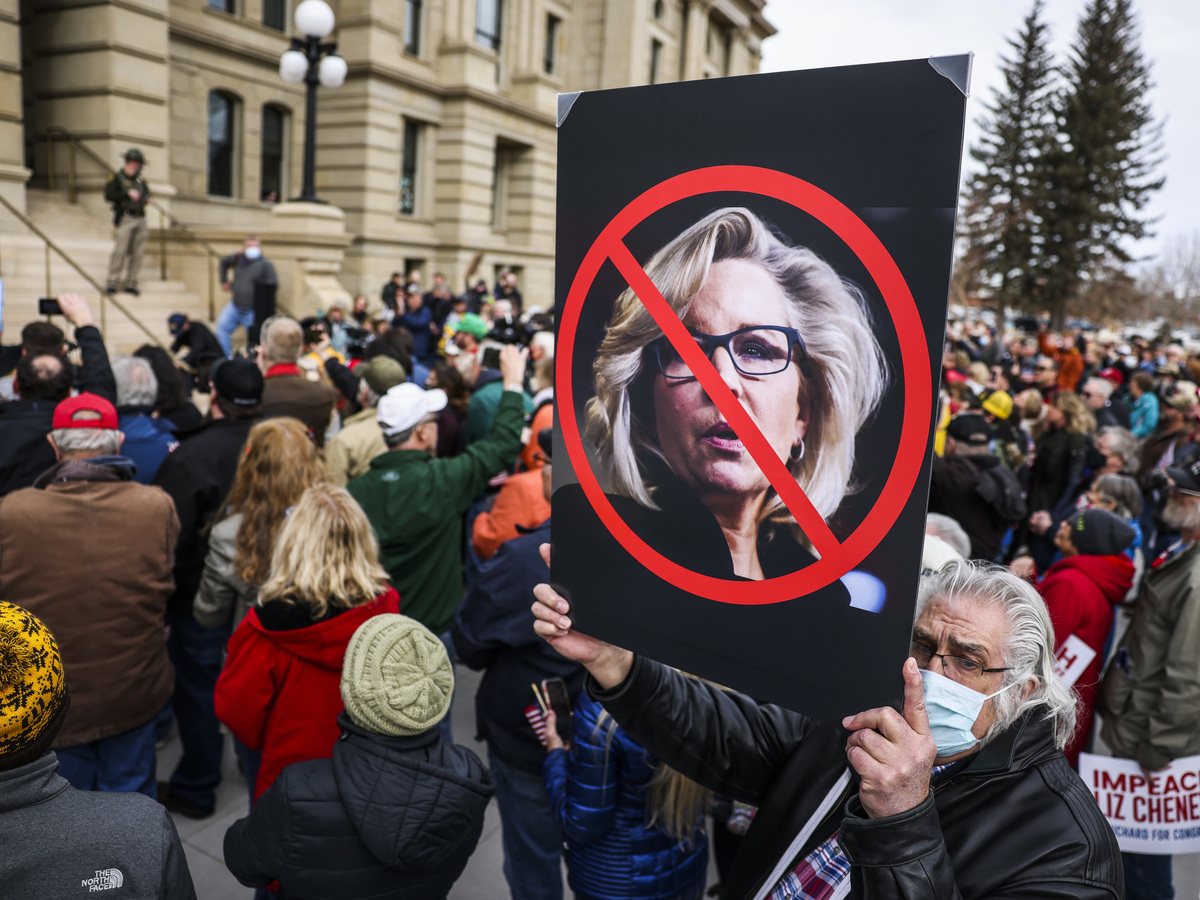 A man holds up a sign against Rep. Liz Cheney, R-Wy., as Rep. Matt Gaetz, R-Fla., speaks to a crowd during a rally against her on Thursday in Cheyenne, Wyoming.

Ironically, it was this latest Trump impeachment that underscores just how much staying power he may indeed have with his party. When 10 Republicans joined every Democrat in support of impeachment, the backlash against them came quickly.

Most prominent among the Republicans who supported impeachment is Liz Cheney, R-Wy., who is also the third-highest ranking member of the GOP House leadership. In a stinging floor speech, Cheney put the blame for the insurrection squarely on Trump. “The president of the United States summoned this mob, assembled the mob, and lit the flame of this attack.” Cheney added, “everything that followed was his doing.”

Cheney also decried Trump’s failures as the assault was underway. The President could have immediately intervened to stop the violence, but didn’t, she asserted. “There has never been a greater betrayal by a president of the United States of his office and his oath to the Constitution.”

That speech happened on January 12. Fast forward to this week, and a political rally in Cheyenne, Wy. Florida Rep. Matt Gaetz, one of Donald Trump’s fiercest supporters, travelled to the state and assembled a crowd outside the statehouse. In a speech, he called for Rep. Cheney to be challenged by a pro-Trump Republican in next year’s Wyoming primary election. Gaetz told his audience that their congresswoman represented the Washington establishment and not them. As they chanted “U.S.A., U.S.A., U.S.A.,” Gaetz shouted into the microphone, “If you want to prove that you have the power to defeat Liz Cheney in this upcoming election, then Wyoming will bring Washington to its knees.” Donald Trump, Jr. even called into the event via cell phone, and urged Wyoming voters to punish Cheney for betraying his father.

Wyoming is a state where Trump carried nearly 70% of the vote last year. Cheney also won her seat easily, but impeachment is now guaranteed to be an issue when she seeks reelection. Gaetz — who went to Wyoming despite pleas by top party officials for an end to GOP infighting over impeachment — also called for her to be stripped of her leadership position among Republicans in the current Congress.

She’s not the only one facing potential retribution for her vote. First-term Republican Rep. Peter Meijer of Grand Rapids, Mich., also voted for impeachment. He already has a challenger in next year’s mid-term election. That candidate is small business owner and Trump supporter Tom Norton, who ran and lost badly to Meijer in the 2020 GOP primary. Norton has already been endorsed by former Trump White House and campaign advisor Steve Bannon, who used his daily podcast to call for other candidates around the country to step forward and challenge those Republicans who voted to impeach. “I think the best thing to do is get great candidates up there and primary ’em now,” Bannon said, adding the following promise, “what we’re gonna do is provide a platform for them” on his podcast.

It sends a message to Republican officeholders everywhere — cross Donald Trump and his supporters will make you pay.

QAnon has staying power among GOP

The pro-Trump faction within the GOP also includes members of Congress who ascribe to conspiracy theories like QAnon, in addition to many who say it wasn’t Trump supporters that led the attack on the Capitol, but Antifa or even Democrats who staged the whole thing to make Trump look bad.

The state Republican Party in Oregon recently passed a resolution calling the GOP votes to impeach “a betrayal,” and claiming that the violence at the Capitol was “a false-flag operation” to provide “sham motivation to impeach President Trump.” Meanwhile, the Arizona state GOP has censured long standing Republicans for their supposed disloyalty to the party, including the sitting Gov. Doug Ducey and Cindy McCain, the widow of Sen. John McCain who was the GOP presidential nominee in 2008. Their sin is that they opposed Trump’s efforts to overturn the result of the 2020 presidential election.

No GOP autopsy, despite losses

In addition to the White House, the party just lost its majority Senate — with Trump himself adding to their troubles by repeatedly attacking the credibility of Georgia’s voting system in the midst of a runoff election where Democrats captured both seats that had previously been held by Republicans.

And while the GOP made some gains in the U.S. House, Democrats still control the chamber. Republican hopes of regaining a majority in the next election could be hindered by battles within the party, particularly if multiple incumbents face primary challenges.

Republican strategist Pete Seat, a former Indiana state party executive and veteran of the George W. Bush White House, says when a political party loses an election, as the Republican’s did last year, and important part of the process is to study the results and “honestly assess what went wrong.”

That isn’t happening yet, he says. “They’re not taking the time to sit down and say, O.K., how do we make sure this doesn’t happen again. What do we have to do? What constituencies are we not reaching out to? Who do we need to be talking to? What policy should we be putting forward to attract these voters?” 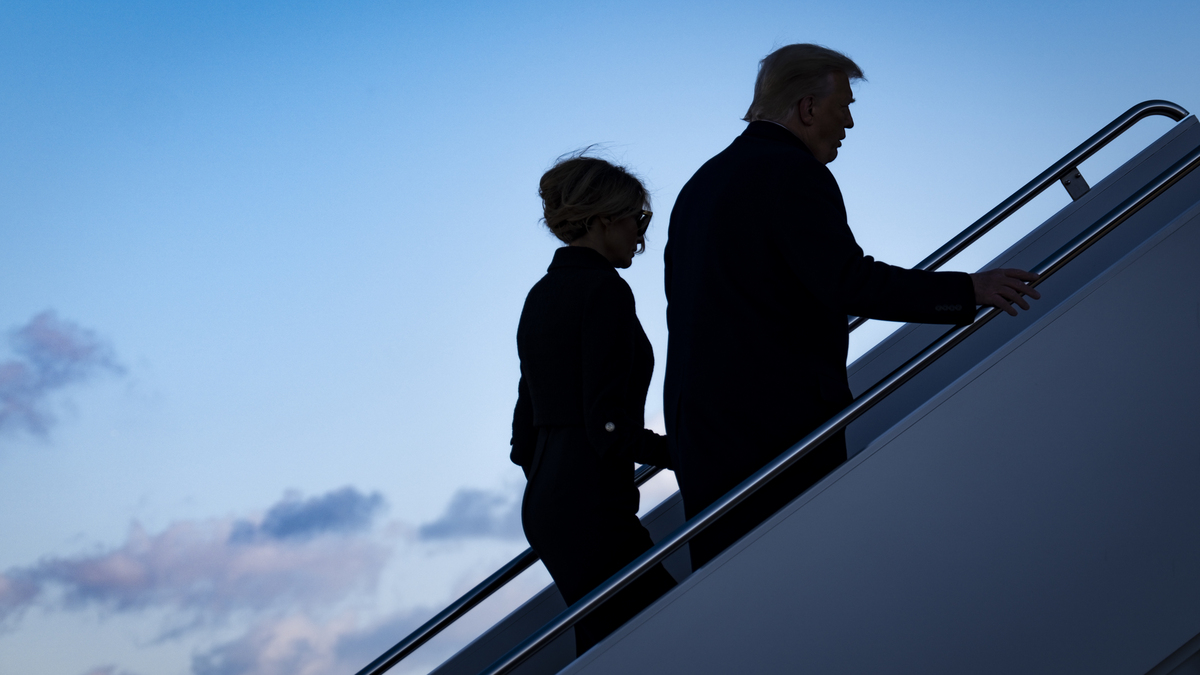 Former President Trump and first lady Melania Trump board Air Force One for the last time on Jan. 20.

That doesn’t mean it won’t happen down the road. But for now, Republicans appear to be skipping past any such introspection after Trump’s loss. The reason being, that so many party officials either believe — or have decided to support — the lie that he didn’t really lose.

Seat does say it’s clear Trump will continue to have an outsized influence in party politics, no matter how this second impeachment trial turns out. After all of the traumatic events of the past month, after the Biden inauguration, and the loss of control of the Senate and the White House, the Republican Party does seem to have closed ranks once again behind Trump. In Congress, the exceptions, which include Sen. Mitt Romney and a handful of others, are a tiny minority. Seat adds that Trump’s ongoing clout with Republicans comes despite no longer having the megaphone of the presidency. He doesn’t even have access to his Twitter following.

“He’s diminished in terms of platform at this moment,” according to Seat, “but not diminished in the sense that we’re continually talking about what impact he’ll have moving forward.”

He says the verdict, for now, is that Trump’s huge presence will endure, at least within the party. And down the road it could even be as a candidate making another run for the White House. Or it may simply be as a former president, who can still influence enough of his GOP base to make it impossible for the party to ignore — or move past him.
Source Link