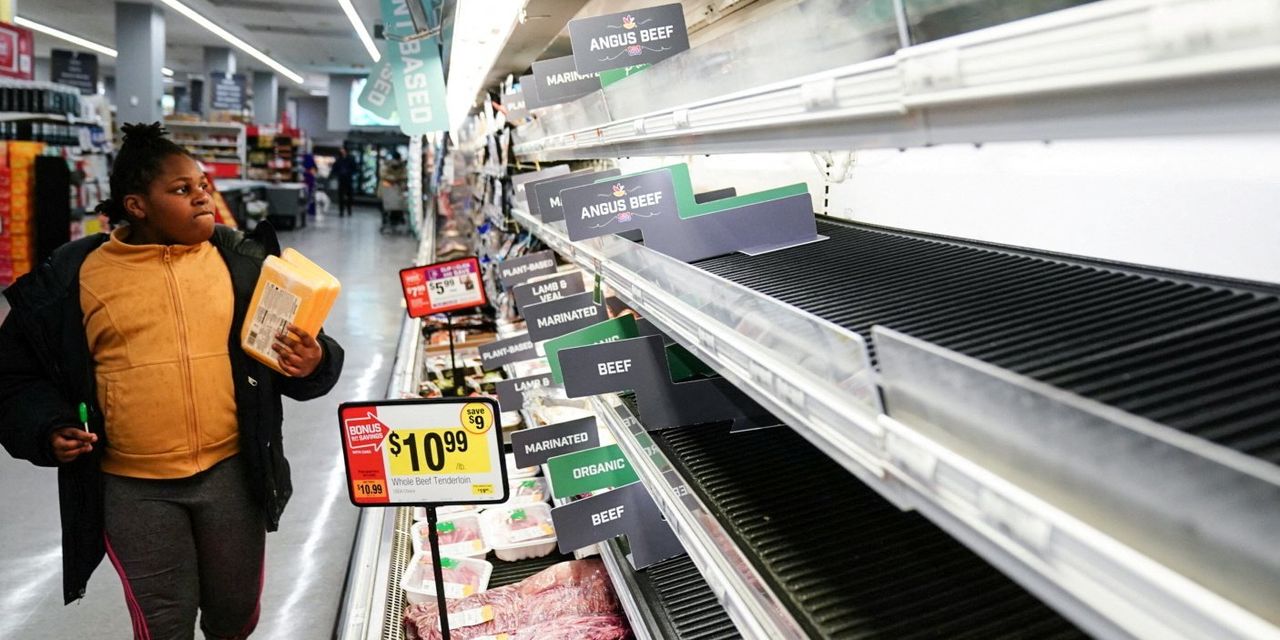 The Labor Department said the consumer-price index—which measures what consumers pay for goods and services—rose 7% in December from the same month a year ago, up from 6.8% in November. That was the fastest pace since 1982 and marked the third straight month in which inflation exceeded 6%.

The so-called core price index, which excludes the often-volatile categories of food and energy, climbed 5.5% in December from a year earlier. That was a bigger increase than November’s 4.9% rise, and the highest rate since 1991.

On a monthly basis, the CPI increased a seasonally adjusted 0.5% in December from the preceding month, decelerating from October and November.

“There’s still a lot of scarcity in the economy. Consumers and businesses are in great financial shape, and they’re willing to pay up for more goods, more services and more labor,” said Sarah House, director and senior economist at Wells Fargo, pointing to reasons for the “blistering pace of inflation.”

Prices for autos and other durable goods continue to drive much of the inflationary surge, fueled by largely pandemic-related imbalances of supply and demand that most economists expect to fade as Covid-19’s impact on economic activity eases.

Federal Reserve Board Chairman Jerome Powell in congressional testimony Tuesday said he was optimistic supply-chain issues would ease this year and help bring inflation down.

The December inflation data also reflects the initial impact of the Omicron variant, which is posing a new threat to the economy as the pandemic enters its third year.

Gains in energy prices—which had been driven by pandemic-related disruptions as well as by weather and geopolitical factors—have shown signs of flagging, with prices at the pump edging down in December. However, food inflation remains elevated.

The December employment report signaled continued tightening of the job market, with the unemployment rate dropping to 3.9% from 4.2% in November, the Labor Department said. Average hourly wages rose 4.7% in December from a year earlier, well above the roughly 3% average increase before the pandemic.

This in part reflects a crucial supply constraint: the pool of workers, particularly for lower-paid work such as in food services.

“We’re seeing people re-sorting themselves into jobs they’re better suited to or that they prefer. So the wage increases we’re seeing are concentrated in the bottom quintile,” said Constance Hunter, chief economist at KPMG. “Overall, this is good for the economy. But it does help some of that upward price pressure persist.”

Wage increases are contributing increasingly to high inflation because they support higher spending, but also because they raise costs for businesses. Many companies plan to pass on higher labor and materials costs to consumers.

In December, some 49% of small businesses said they planned to raise prices in the next three months, on net, according to the National Federation of Independent Business, a trade association. That figure is down slightly from October and November, but close to the highest share since monthly records began in 1986.

John Merritt, vice president of Elaine Bell Catering in Napa, Calif., said staffing was an immediate issue when demand for weddings and other big events came surging back last June. The company raised wages 50% in a bid to retain workers and hire new ones, but still had to rely on the services of temp agencies. Due to increased labor costs—along with soaring prices for meat, cheese and wheat-based products—the company didn’t make a profit last year, he said.

“People frequently say [restaurant and catering workers] are low-price people. Well, our base pay is now $30 an hour for wait staff and we still can’t fill positions,” he said. “This is going to be an ongoing problem. If we want to have the quality staff for the kinds of events that we do, we know we need to pay for it or we aren’t going to get them.”

The caterer has raised prices for the coming year by 25% to 35% from pre-pandemic rates. So far, customers are accepting the increases. “We’ve never raised prices that much from one year to the next. But we’ve never had cost increases like this either,” said Mr. Merritt.

Demand for autos, furniture and other goods has boomed during the pandemic, straining supply chains and fueling much of the inflation surge. The most prominent example is a shortage of semiconductors that has hamstrung auto production, sending prices for cars and trucks soaring.

Despite disruptions from Omicron, there are some indications of improvement in supply-chain woes. A December survey of manufacturers by the Institute for Supply Management showed a decline in prices and delivery times, signaling that materials shortages might be easing.

Mr. Sharif of Inflation Insights expects used-car and household-furnishing prices to ease further in the coming months as consumers resume spending on services and run down the excess savings amassed during the pandemic.

Economists also expect price pressures from supply constraints to be replaced by higher rent and medical-care costs that tend to be more persistent. Rent, which accounts for nearly one-third of the CPI, has begun accelerating in recent months.

The broadening of price pressures is another sign to watch to gauge inflation’s persistence, Ms. House of Wells Fargo said. The number of price categories experiencing inflation of 3% or more in the past year has nearly doubled since December 2020. That share is the highest it has been since 1991, she added.

High inflation has prompted some consumers to rein in spending.

Until recently, Pete and Sally McAllister grilled steak every Wednesday evening, but they recently switched to chicken chili because of the high cost of beef.

“The price we were paying [for filet mignon] went from about $12 a pound to over $25. As a result, we’ve cut those meals out of our diet,” said Mr. McAllister, a 72-year-old retiree in Hilton Head, S.C. “The chicken and beans have been a good protein substitute for the beef.”

He said he also has stopped adjusting the thermostat upward because of rising home-heating costs and is going out of his way to find cheaper gasoline. Mr. McAllister said he is golfing less after a number of friends canceled their golf-club memberships to save money. “So there’s kind of a psychic price to inflation too,” he said.

Write to Gwynn Guilford at gwynn.guilford@wsj.com