Protesters in Yangon run from police Sunday after they fire tear gas during a demonstration against the military coup. STR/AFP via Getty Images hide caption 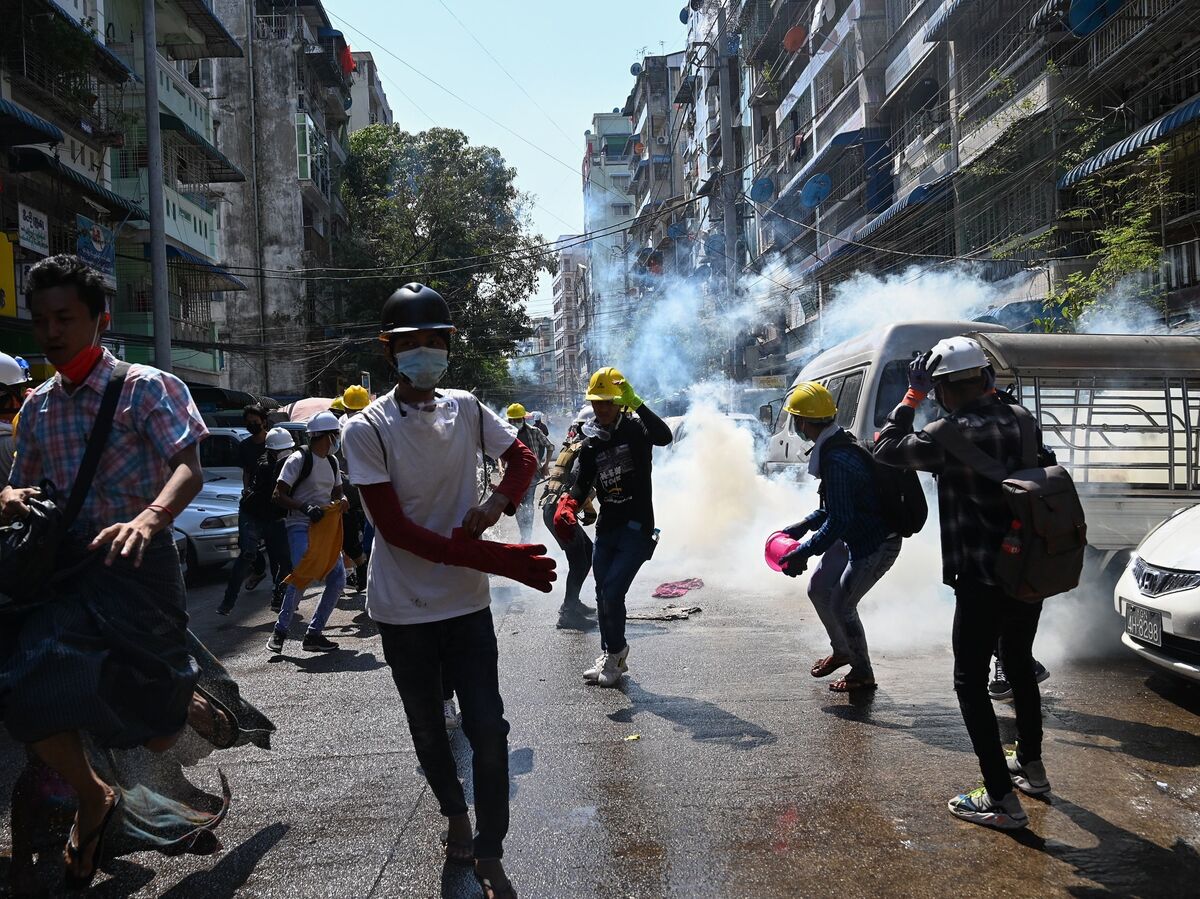 Protesters in Yangon run from police Sunday after they fire tear gas during a demonstration against the military coup.

More than a month after the military orchestrated a coup against the country’s democratically elected leader, Myanmar police are continuing to use violence against peaceful protesters. The death toll is continuing to rise — and it now includes a local official from the deposed leader’s political party.

The BBC reports that the body of U Khin Maung Latt, who campaigned for candidates from Aung San Suu Kyi’s National League for Democracy party in recent elections, was released to his family on Sunday. Police reportedly took him by force from his home late Saturday. Witnesses reported seeing him being kicked and beaten. Police told the family he died after fainting. The pro-democracy activist was buried on Sunday.

The military is using increasingly aggressive tactics to try to maintain order as it arrests protesters throughout the country. Myanmar Now reports that police and soldiers broke up a sit-in protest in downtown Mandalay, chasing protesters as they tried to flee. More than 70 people were arrested.

Elsewhere in the city, army troops asked Mandalay Technological University staff members if they could use the institution as a base; after staffers rejected the request, soldiers cleared the area by force, Myanmar Now reported. On social media, security footage said to be from the school shows police with shields out and guns drawn as they enter the school grounds on Sunday morning.

Multiple universities and hospitals are being occupied by police, and security forces often target medical personnel and ambulances, The Associated Press reports. Occupying hospitals lets police easily arrest wounded people, who they would presume to be protesters, the AP said.

Social media posts from the country are full of reports of demonstrators facing tear gas, stun grenades, rubber bullets and even live rounds as they gather in Myanmar’s largest cities. In the posts, people refer to the junta’s security forces as “military terrorists.” Witnesses have posted videos of police opening fire on demonstrators in Bagan, the ancient capital of Myanmar. In Yangon, police dispersed protesters Sunday by firing tear gas into the crowds.

The violence isn’t limited to the sites of demonstrations. For days, heavy weapon fire has been heard in the evenings as police patrol the streets to enforce an 8 p.m. curfew. United Nations special rapporteur Tom Andrews told the BBC he has seen video from around the country showing security forces firing into buildings.

“You can see them walking down the streets in Yangon, firing up through the windows as people look in horror down on the streets,” said Andrews. “These are gangs. This is criminal activity. They’re terrorizing these neighborhoods. So there is a compelling reason for the world to act, and for the world to act now.” Andrews says he will address the U.N. Security Council this week.

In February, Myanmar’s ambassador to the U.N., who was appointed before the coup, pleaded for international assistance — and was removed from his position the next day. But Kyaw Moe Tun has refused to give up his seat, even as the Myanmar military has named a replacement. U.S. Ambassador to the U.N. Linda Thomas-Greenfield said she “commended him for his courageous statement at the UN General Assembly and reiterated our support for the people of Burma and the restoration of the democratically-elected government.”

The Assistance Association for Political Prisoners reports that at least 54 people have been killed since the Feb. 1 coup, and nearly 1,800 have been arrested. Around 300 of them have been released, but the rest remain in detention, AAPP says.

Meanwhile, state-run media is characterizing the demonstrations as “riots.” In a statement, the Myanmar Police Force said it was trying to minimize injuries as it works toward stabilizing the country.

The country’s deposed civilian leader, Aung San Suu Kyi, has had two trial appearances, even as she has been unable to meet with her attorney. The former leader “has no chance of a fair trial,” her lawyer, Khin Maung Zaw, told NPR’s Weekend Edition. “She cannot get legal assistance. She is now kept incommunicado. She cannot get open trial.” Khin Maung Zaw said he doesn’t feel safe, but he feels a duty to continue representing his client, as well as the other students and demonstrators who have been put on trial.
Source Link