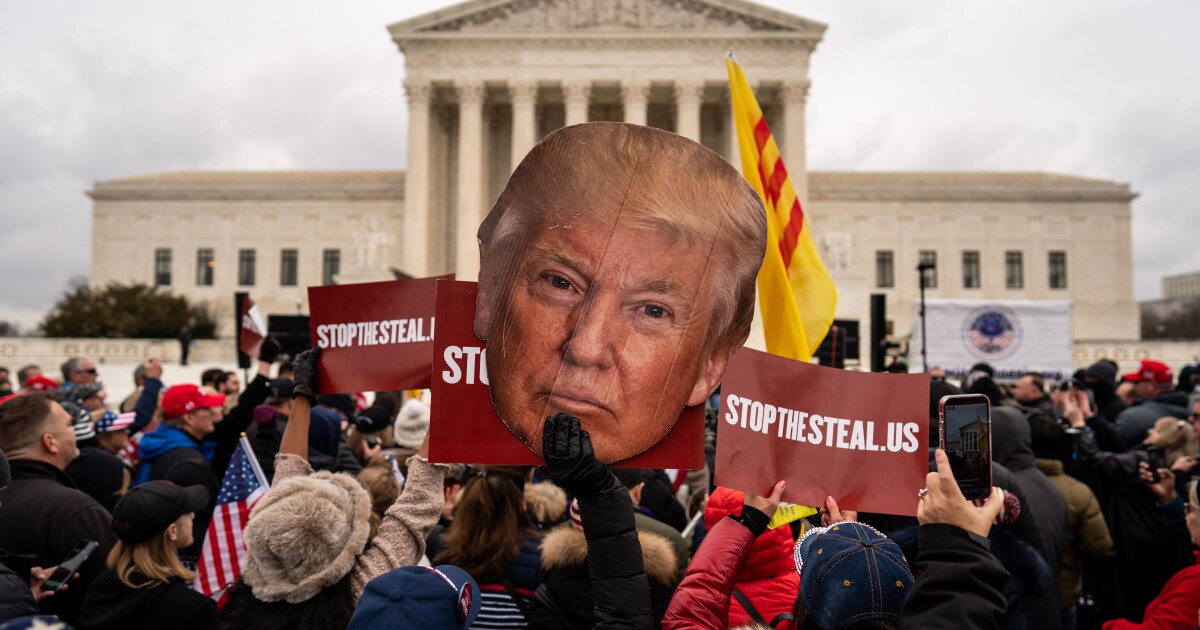 How will Garcia’s anti-impeachment stance play with district voters when the former Navy fighter pilot is up for reelection again in 2022?

No one can see that far ahead, but it’s hard to envision it helping him. It probably will hurt.

In contrast, Rep. David Valadao of Hanford in the San Joaquin Valley voted to impeach Trump on a charge of inciting insurrection by his supporters who stormed the U.S. Capitol to block certification of Biden’s victory. Valadao was one of just 10 Republican House members to buck the president and the only one from California.

The odds are good that it will help the dairy farmer’s reelection bid next year in a highly competitive district.

Garcia’s 25th District, which covers the Antelope and Simi valleys, voted for Biden by a margin of 10 percentage points, according to the nonpartisan California Target Book, which tracks congressional and legislative races. But Garcia won by a razor-thin 333 votes out of nearly 339,000.

The losing Democrat was former state Assemblywoman Christy Smith. She originally lost to Garcia last spring in a special election to fill a vacancy created by the resignation of Democrat Katie Hill. Smith intends to challenge Garcia again next year.

The competitive district has been gaining in Democratic voter registration. In November, Democrats outnumbered Republicans by 7.5 percentage points.

So why did Garcia vote to protect a president who was rejected by his constituents in November?

“I don’t understand the upside,” said Darry Sragow, a former Democratic strategist who publishes the California Target Book. “It’s hard to imagine Donald Trump emerging as a hero and vindicated.

“You could write the TV ad in five minutes: footage of the riot in the Capitol, mention the Capitol cop who died. ‘And even after that, Congress member so-and-so voted to support the insurrection.’ You don’t even have to mention Donald Trump.”

That would force Garcia to spend precious campaign time and money denying he supported an insurrection.

Garcia’s explanation for his House vote was this: “With only a few days left in the Trump administration, the vote to impeach the president is no more than political theater that runs the risk of further dividing us at a time when we need to come together.

“I urge my colleagues on both sides of the aisle to stop playing political games.”

Too bad Garcia and his colleagues — and the president — didn’t try to “come together” years ago.

Valadao’s 21st District in the farm belt is similar to Garcia’s politically, voting for Biden by a margin of nearly 11 percentage points. But voters narrowly chose Valadao over Democratic incumbent TJ Cox by less than 1 point. Democrats hold a 16-percentage-point advantage in voter registration.

“The one California Republican who got it right [on impeachment] is Valadao,” Sragow says.

Valadao explained it this way: “President Trump was, without question, a driving force in the catastrophic events … by encouraging masses of rioters to incite violence on elected officials, staff members and our representative democracy ….

“I have to go with my gut and vote my conscience. [Trump’s] inciting rhetoric was un-American, abhorrent and absolutely an impeachable offense. It’s time to put country over politics.”

Valadao, unlike Garcia, knows the pain of losing a congressional election. In 2018, an anti-Trump blue wave swept out seven Republican House members in California, including Valadao. Cox beat him then. And in their return bout, Valadao knocked out Cox.

As a retired top legislative advisor used to remind me: “Where you stand depends on where you sit.”

If you sit in a Republican caucus — or a Democratic caucus — your stand on a major issue will largely depend on your party colleagues’ consensus. And the consensus is usually shaped by the party leader.

But often the leader is following the caucus. House Minority Leader Kevin McCarthy (R-Bakersfield) has been a Trump puppet for four years and his anti-impeachment stance was no surprise. But it’s likely that he has been leading his conservative colleagues in the direction they insist on going.

“McCarthy has to go along with the caucus,” Sragow says. “He wants to keep his job and become speaker one day. He had no choice. He’s a very smart guy. He tempered his comments.”

In the House impeachment debate, McCarthy finally began backing away from Trump, acknowledging that “the president bears responsibility for [the] attack on Congress by mob rioters.”

But “a vote to impeach will further divide the nation,” he contended. McCarthy proposed a censure resolution instead.

It’s a little late to voice concern about a divided nation. And rather than a wrist slap, Trump needed to be booted for ruining America’s proud tradition of peacefully transferring power.

Rep. Young Kim of Fullerton is another new Republican House member who could be hurt by her anti-impeachment vote. She represents the competitive 39th District, where Biden won by 10 percentage points. She beat an incumbent by only 1.2 points.

There’s a joker in all this. Every district will be redrawn before next year’s elections. But the remapping isn’t likely to help Republicans because their numbers have plunged since the last reapportionment a decade ago.

“Republicans who won back seats from Democrats and opposed impeachment were playing with fire,” Sragow says.

Whether it’s still burning next year will depend a lot on how Trump behaves.