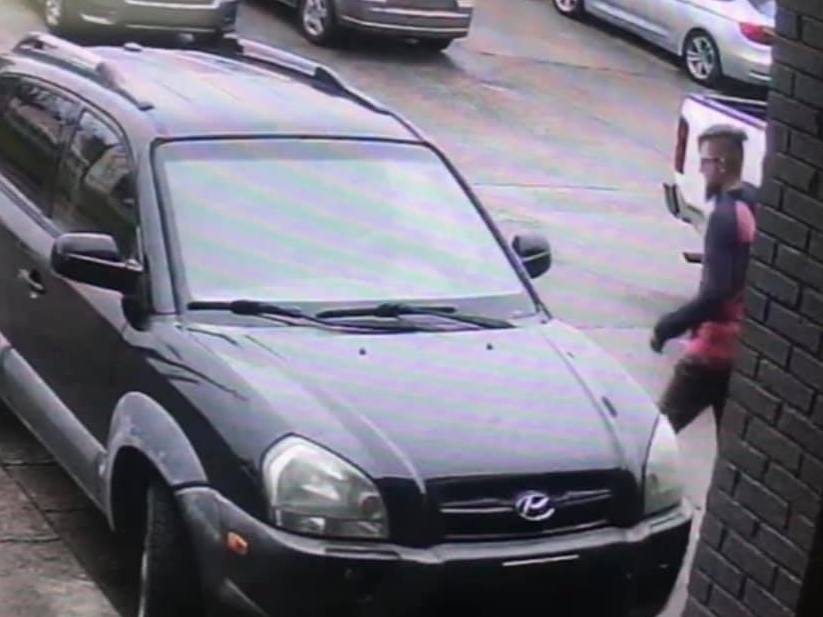 Surveillance camera footage released by the Cherokee County Sheriff’s Office appears to show the suspected gunman outside of Young’s Asian Massage — one of three spas where people were killed Tuesday.

Robert Aaron Long, the suspected gunman in three attacks that killed eight people Tuesday, has confessed to the crime, police said in Atlanta.

Six women of Asian descent are among the dead, raising suspicions of a hate crime. Long claims race did not play a role in his decision to target the massage parlors, police said.

Long, 21, “may have frequented some of these places in the past,” Cherokee County Sheriff Frank Reynolds said, after saying that the suspect indicated to investigators that he has a sexual addiction.

Long was arrested within hours of the attacks on the three spas, after police tracked his vehicle on the interstate in south Georgia. As of Wednesday morning, none of the victims had been publicly identified.

Responding to questions of whether the shootings represent a hate crime, Atlanta Police Chief Rodney Bryant said, “We are still early in this investigation, so we cannot make that determination at this moment.”

“This was a tragic day, with many victims,” Mayor Keisha Lance Bottoms said. At a late-morning news conference, she said the businesses targeted in Atlanta had not been on the radar of the city’s police as potential sites of crime or trouble.

“We are not about to get it into victim blaming, victim shaming here,” Lance Bottoms said. “We don’t know additional information about what his motives were, but we certainly do not begin to blame victims.”

“He does claim that it was not racially motivated,” Capt. Jay Baker of the sheriff’s office said, while cautioning that it’s still early in the investigation. “He apparently has an issue, what he considers a sex addiction, and sees these locations … [as] a temptation for him that he wanted to eliminate.”

The shocking violence could have been worse, Lance Bottoms said, noting that when he was arrested, Long was heading to Florida, where he seemed to be planning to carry out other, similar attacks.

Reynolds said his county is mostly a bedroom community, which had just one murder in the past year. “We don’t have a lot of crime in that area,” he added.

Long was initially identified through video surveillance footage from one of the crime scenes, the sheriff said. After his agency posted images to social media, Long’s parents got in touch to say they believed it was their son in the pictures.

“They’re very distraught and they were very helpful in this apprehension,” Reynolds said.

Police were able to track Long’s cellphone, which helped them narrow down his movements after the attacks.

Long is expected to be arraigned Thursday morning.

The first attack targeted Young’s Asian Massage in Acworth in Cherokee County northwest of Atlanta, where the sheriff’s office said four people died and at least one other person was injured.

“The victims were two Asian women, a white woman and a white man,” according to The Atlanta Journal-Constitution, citing Baker. A fifth victim, a Hispanic man, was taken to the hospital for his injuries.

Surveillance footage from a neighboring business appeared to show Long’s Hyundai Tucson SUV entering the massage parlor’s strip-mall parking lot around 4:50 p.m. ET. Long, 21, is from Woodstock, Ga., which is in Cherokee County.

The second and third attacks came about one hour later on Piedmont Road in Northeast Atlanta, where Atlanta police were alerted to a robbery at the Gold Spa.

When officers arrived at the spa, they found three women dead from gunshot wounds inside. While there, the officers got a new call of gunshots fired at the Aromatherapy Spa, almost directly across the street. When they entered that business, the officers found a fourth woman had been killed.

From there, the suspected gunman fled to the south, as police spread the alarm to be on the lookout for his vehicle. As he drove south on Interstate 75, the authorities set a trap for him.

Around 8 p.m., Crisp County Sheriff Billy Hancock said, his agency got word “that a murder suspect out of north Georgia was getting close to entering our county.”

Some 30 minutes later, Georgia State Patrol troopers performed a maneuver on Long’s SUV that caused it to spin out of control, Hancock said. The suspect was taken into custody without incident and taken to the county jail, he said, adding that the FBI then sent agents to continue their investigation.

The FBI is assisting both Cherokee County and Atlanta police in handling the case, Kevin Rowson, a spokesman for FBI’s Atlanta office, told NPR.

This is a developing story. Some things reported by the media will later turn out to be wrong. We will focus on reports from officials and other authorities, credible news outlets and reporters who are at the scene. We will update as the situation develops.
Source Link